and for some reason, Cook likes to dress in Nazi SS (Skeptical Science?) uniforms and fraudulently identify as some-one else. (link)

THAT is really not funny, John.

Although, in this strip, Cook inadvertently reveals some truths about the fraud of the global warming alarmists:

Each panel reveals truths of the Falsified Man-made Global Warming Hypothesis; however, for the first revelation, look at the first panel:

Meanwhile another couple of cartooning Johns (Deering and Newcombe) get closer to the truth of climate change.

They co-author a cartoon called Zack Hill, about an 8 year old boy and his friends and his dog, a Boston called Cagney. 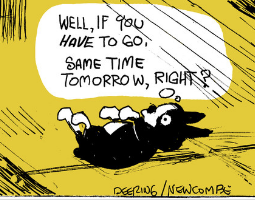 Zach's mother runs a boarding house with an unusual array of permanent guests; two of whom are Greenie Vince (above centre)  and hard right man Carl (right above) (Zach in Halloween pumpkin.)

Look at this series of cartoons from 2014 ridiculing the fraud of man-made global warming: