Warmist Bjørn Lomborg by the 2070s, climate change may cost the world somewhere between 0.2 per cent to 2 per cent of GDP

Bjørn Lomborg is a warmist.

He believes that man's CO2 emissions are warming the planet. However, he also knows that they are not dangerously causing destruction and it will cost billions of useless dollars to try to counteract the warming.

Bjørn has issued an analysis of Al Gore's An Inconvenient  reported in the Australian:


Even astrophysicist Stephen Hawking recently declared that US withdrawal from the Paris climate treaty “could push the Earth over the brink, to become like Venus, with a temperature of 250 degrees (Celsius), and raining sulfuric acid”.

How stupid is that? Even the UN's worst scenario does not support that.


The IPCC estimates that, by the 2070s, climate change may cost the world somewhere between 0.2 per cent to 2 per cent of GDP. That’s a problem, but by no means the end of the world. The IPCC finds that for most economic sectors, “the impact of climate change will be small relative to the impacts of other drivers” such as changes in population, age, income, technology, relative prices, lifestyle, regulation and governance.

Now, remember, as noted above, Bjørn Lomborg is a warmist. He believes that man's CO2 emissions are causing/contributing to global warming.


The Paris Agreement will cost each American $US500 a year, each European $US600 and each Chinese person $US170. Despite rhetoric about keeping temperatures below 1.5C, these promises together will achieve almost nothing. By the UN’s own estimate, the Paris Agreement will reduce emissions by less than 1 per cent of what would be needed to keep temperature rises under 2C (a less ambitious target than 1.5C) yet will cost $US1 trillion to $2 trillion a year by 2030, mostly in reduced GDP growth. The treaty will deliver far less than most people expect, yet will cost much more than most people are willing to pay.

Achieving significant cuts would be much more expensive. For the EU to fulfil its promise of cutting emissions by 80 per cent in 2050 (the most ambitious climate policy in the world), the average of the best peer-reviewed models show that the cost would run to at least $US3 trillion a year, and more likely double that — meaning $US6000 for each EU citizen a year.

AND this is for the so-called, rich countries. As Bjørn explains:


Fostering a sense of panic doesn’t just distract us from other issues; it also means we don’t tackle climate change well. Economic studies show the right way forward is not subsidising inefficient solar panels, the mainstay of today’s climate spending, but to increase investment in green energy research and development to push down the cost below fossil fuels.

Over-the-top, alarmist rhetoric has a real cost. It encourages us to engage in phenomenally expensive and unhelpful climate policies while ignoring the smaller, cheaper and more realistic ways to respond to this and the challenges that will be much more pressing.

Science has no idea if climate change is causing more (or fewer) powerful hurricanes.

Ross McKitrick, in partnership with Steve McIntyre, blew the fake MBH98 Hockey Stick graph out of the arena.

In the Washington Examiner, Ross writes, Under the title:

Despite Hurricanes Harvey and Irma, science has no idea if climate change is causing more (or fewer) powerful hurricanes


After Hurricane Harvey hit Texas, it didn't take long for climate alarmists to claim they knew all along it would happen. Politico's Eric Holthaus declared "We knew this would happen, decades ago." Naomi Klein stated "these events have long been predicted by climate scientists." Joe Romm at ThinkProgress wrote, "the fact is that Harvey is exactly the kind of off-the-charts hurricane we can expect to see more often because of climate change."

According to these and other authors, rising greenhouse gas levels are at least partly to blame for the occurrence and severity of Harvey, and probably for Hurricane Irma as well.

But after-the-fact guesswork is not science.


weren't able to predict the development and track of Hurricane Harvey until a few days before it hit.

Yep! The idiotic idea that "climate science is settled" has been busted.

A settled theory makes specific predictions that can, in principle, be tested against observed data. A theory that only yields vague, untestable predictions is, at best, a work in progress.

After Hurricane Katrina hit New Orleans in 2005, some climate modelers predicted such storms would be more frequent in a warmer world, while others predicted the opposite, and still others said there was no connection between warming and hurricanes.


What ensued was an historically unprecedented 12-year absence of major (category 3 or higher) hurricanes making landfall in the United States, until Harvey.

And Ross exposes the commentariat when he closes with:


....when opinion writers tacitly assume all good weather is natural and GHGs only cause bad weather, or claim to be able to predict future storms, but only after they have already occurred, I reserve the right to call their science unsettled.

Can you imagine why any citizen would hope for destructive results from cyclones in order to push their political objectives?

James Delingpole reveals, from ISIS sites and US anti-Trump tweets, that these two bodies are working in synch, to hope for destruction from Harvey and Irma.


Islamic State supporters have united with their natural allies on the regressive left to celebrate the destructive power of Hurricane Irma on the Great Satan and its wicked, climate-denying president Donald Trump.

James follows up with links from ISIS sites and Looney links, then continues:


Though Islamists and progressives differ as to the cause of hurricanes – one side ascribes them to Allah, the other to Donald Trump and man’s selfishness, greed and refusal to amend his carbon-guzzling lifestyle – they are both unanimous that the damage being done is good thing. 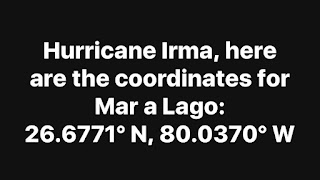 Honestly, what true Patriot would call for destruction of part of his own country for a political point?