The Greatest Scientific Fraud of all Time

A friend advises me that Francis Menton is a high powered Manhattan attorney (Australians: read lawyer) who typically deals with clients who have $100 MILLION dollar legal problems.

When my friend asked Menton what he would do if my friend came to him with just a $100 thousand dollar problem.  "We would find you another attorney," he replied!

OK! So Francis Menton has written a series in the MANHATTAN CONTRARIAN under the headline:

The Greatest Scientific Fraud of all Time

The following is from part XVII of the series.

Just keep your eyes open for more and more examples of tampering with and manipulation of the world temperature record to enhance the "global warming" narrative, and it seems that you will have no problem coming up with an endless supply.  One of the best recent examples comes from Australia. 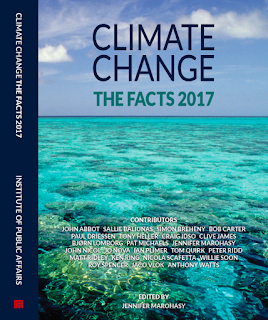 Dr Jennifer Marohasy is another friend who has been attacking the AGW fraud for years. She edited the recently published Climate change The Facts 2017

Australia is blessed with a small band of sharp-eyed skeptics who have made a mission out of trying to keep their crooked government bureaucrats honest.  Two of the leading lights are Jennifer Marohasy and Joanne Nova.  As Marohasy states in a recent post, "I suffer . . . from a propensity to always check things."  So back in early July, Marohasy was checking on some very cold readings recorded in the mountains of Australia -- readings colder than -10 deg C, which is the same as 14 deg F.  (Remember that July is winter in Australia,)  And she stumbled on the fact that, somewhere along the line, the Australian Bureau of Meteorology had put in place some supposed "quality control" technology in their weather stations that would automatically reject valid low temperature readings as spurious.  As reported by Marohasy on July 5:

[W]hen the weather station at Goulburn recorded -10.4 on Sunday morning – the Bureau’s ‘quality control system’, ‘designed to filter out spurious low or high values’ reset this value to -10.0.  To be clear, the actual measured value of -10.4 was ‘automatically adjusted’ so that it recorded as -10.0 in the key CDO dataset.

Huh?  By the way, if 0.4 deg C does not sound like a lot to you, remember that our temperature overlords regularly declare with the loudest possible megaphone that new world temperature records have been set by amounts well less than 0.1 deg C. 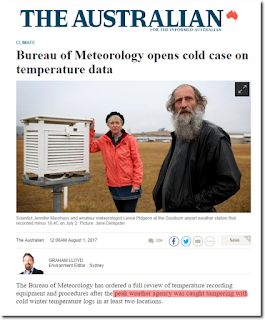 Isn't it amazing that defrauding the data in one weather station has  ricocheted around the world ?


There are many more examples. Just put "jennifer marohasy bom temperature" into your browser.

If there really was a problem, there would be no need for the authorities to falsify data. If they were subject to audit, like enlisted companies are, they would be in jail (gaol).