Houston, we have a problem


'"Houston, we have a problem" is a popular but erroneous quote from the radio communications between the Apollo 13 astronauts and the NASA Mission Control Center ("Houston") during the Apollo 13 spaceflight,[1] as the astronauts communicated their discovery of the explosion that crippled their spacecraft. '

That quote may have been erroneous, however, there are now two Houston problems.

The First: Alarmists at the Houston Chronicle told its readers, in 2011,  to get used to more hot and dry summer weather driven by climate change.

Get used to it!
The weather of the 21st century will be very much like the hot and dry weather of 2011.

Little did they know what nature had in store for them in summer 2017! 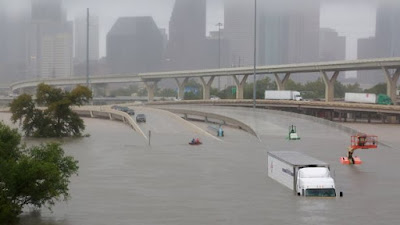 The other and more important problem is that Houston produces nearly one-third of U.S. refining capacity: