Evidence for the Ombudsman of possible Malfeasance in Public Office by the NSW Department of Education.

Dear Citizens of Australia and Elsewhere,
As shown in subject line of this email, the evidence indicates that there is a biased ideology in Australia’s Education system, both at State and Federal level. It is preventing the dissemination of knowledge and stifling enquiry based learning. The perpetrators of what seems to be a deliberate dumbing down of the curriculum in Australia must be exposed and held accountable. In my humble opinion they are either complicit to what appears to be criminal activity by the UN or they are being used as useful idiots for the  evil global agenda that threatens our democracy.
I hope the information thread below inspires you to help in our fight to save Western democracy.
On the 19th April 2017 Dr Judy Ryan lodged a formal complaint against the NSW Dept of Education. detailed below
--------------------------------------------------------------
Dear Minster,
This is a Formal Complaint against one particular maladroit policy of the NSW State Education Department.
The evidence shows clearly that there is a top down policy of preventing teachers at NSW State schools from viewing any evidence supporting the null hypothesis in the ongoing debate regarding 'Climate Change'. Teachers are not allowed to teach it (ref conversations with numerous teachers) and they are not permitted to even read it.
Of the approximately 2600 schools to whom I sent a recent email approximately 820 were instantly rejected.
Distributing the evidence for the null hypothesis re “Climate Change” in the most debated scientific issue of our time does not meet the definition of spam. However, this was stated as the grounds for rejection.
Further, if the rejections are based on a political ideology of one individual or a small group of individuals it is a clear case of willfully inflicting ignorance of the null hypothesis, both upon themselves and the Australian teachers
Please acknowledge receipt of this formal complaint on your website within 24 hours. I then look forward to your response addressing the specific issue within 28 days.
Respectfully Yours


The Department failed to provide a satisfactory response within the stipulated time frame.  Dr Ryan then took her complaint to the NSW Ombudsman. The Ombudsman’s response is paraphrased  below


Your complaint about the Department of Education (the department)

The Ombudsman noted that the complaint concerned the information taught to school children re the reasons for global warming and noted that their role is too investigate government agencies where there is evidence of unreasonable or unlawful conduct.

The Ombusman's outcome was they thought there was not enough evidence of wrong conduct on the agency's part to formally investigate the issue.

The education department relies on the NSW Education Standards Authority (NESA) for syllabuses, that further concerns should be addressed to NESA and the Ombudsman will take no further action on the complaint.

As you can see from the email the NSW Ombudsman is (1) tardy with her response, (2) obfuscates the issue by referring to an earlier formal complaint and (3) states that there is insufficient  evidence of unlawful practice in the NSW Department of Education to require intervention by the Ombudsman.

Dear Ombudsman, here is the evidence of the top down instant blocking of information, regarding the null hypothesis re Human Caused Global Warming, to NSW schools . As can be seen the reason given according to Trend Micro is that Dr Ryan's email contained abuse.  Also note that delivery attempts were zero. 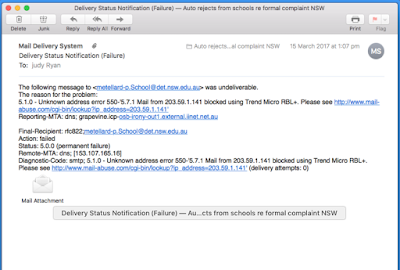 The undeliverable response  with this code arrived for over 800 NSW schools  minutes after Dr Ryan email sent her email.

In my humble opinion this is robust evidence of either wilful blindness or malfeasance in public office.  However, the question is why is the instant undeliverable only 800 of the approximately 2500 public schools in NSW.  I call upon the Ombudsman to investigate both at Departmental level and at the individual schools.

In conclusion, I and my colleague Dr Marjorie Curtis are decent ethical people  trying to spread the evidence regarding one of the greatest frauds in history. The evidence is the truth The truth never changes and it will not go away. We will no longer reply politely to the sometimes very abusive responses we get. If you do not want to read our evidence based public emails and have a clear conscience about that then use your technological savvy and direct our emails to your Junk box. But do not bother us anymore.
For and on behalf of my non technology savvy friend and colleague Dr Marjorie Curtis
Respectfully Yours
Dr Judy Ryan