The Wizard of Oz is a Finkel 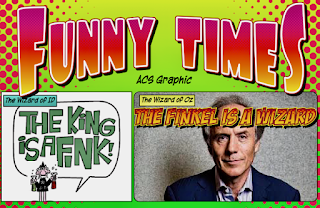 The Chief Scientist Finkel must be a mighty medieval Wizard if he thinks his "Blueprint for the Future" will reduce energy prices and secure Australia's energy future.

......unless we follow the Finkel plan longer term there is a near certainty of extended and regular blackouts in Victoria, NSW, and Queensland. South Australia has already experienced blackouts so understands what can happen. It is heading in the direction outlined by Finkel.

Australia can be very grateful to Alan Finkel.

Mr Gottliebsen seems to be at odds with many other commentators.

Climate Scientist Bill Kininmonth, in an opinion piece in the Australian wrote: (link)


The blueprint does not address the appropriateness of the Paris ­Accord as a policy objective (too hard? — politically incorrect?). There is no acknowledgment that global temperatures have failed to match the Intergovernmental Panel on Climate Change scenario of ­anthropogenic global warming and scientists don’t know why.

The need for the blueprint is that the electricity market is ­becoming increasingly distorted as governments pursue policies aimed at reducing carbon dioxide emissions. The distortion is manifest as a reduction in security and reliability of the infrastructure and higher prices.

Note:  "security and reliability of the infrastructure..."


It is unfortunate that the Chief Scientist did not conduct an independent review of the science ­underpinning the contentious ­hypothesis of dangerous anthropogenic climate change before embarking on a blueprint for the national electricity market. A misplaced objective of emissions ­reduction at the expense of affordable and reliable electricity ser­vices will unnecessarily impov­erish Australians. (bold added)


Finkel must be joking when he claims the new clean energy target with high-cost renewable of 42 per cent by 2030 would reduce prices. For prices to then fall would require huge subsidies to persuade investments in wind and solar farms. How could Malcolm Turnbull possibly say that the blueprint has “merit”?

WE can have cheaper electricity and we can have reliable electricity. Or we can have prime ministers, foreign ministers and energy ministers like Malcolm Turnbull, Julie Bishop and Josh Frydenberg able to prance and preen at international conferences.

At the current polling, Terry notes that, after the 2019 election, it will be Shorten, Wong and Butler who will be doing the dancing and preening. And the chief scientist knows "next to nothing about economics or business reality [and here is the stinger - Ed]or even just plain old reality.

And then Terry reveals the really tragic message:


Finkel wants to increase the amount of electricity we get from wind and more so from solar by anywhere between four and six times what we get now.....[however] THE only way you’ll get cheaper, plentiful and reliable electricity, is the same way we got it for going on for most of the 20th century: from coal-fired power stations.

The idea that you could replace that combination with utterly erratic wind and solar and batteries should instantly strike anyone with an IQ of more than 100 as laughable — as insanely, suicidally laughable. But forget about households having to pay more and live with the “occasional” blackout, try persuading someone to invest $1 billion in a new manufacturing plant on the promise of that.

So, I would listen to financial Wizard, Terry McCrann. I would NOT listen to the Wizard of OZ - Alan Finkel, whose report looks like something from Alice in Wonderland rather than a report from reality.

In memory of the laughable climate change professor, Chris Turney and his "ship of fools stuck in Antarctic Ice whilst trying to show that Antarctica was losing ice, we now have another "ship of fools" stuck in Northern Hemisphere Ice.

A global warming research study in Canada has been cancelled because of “unprecedented” thick summer ice.

Naturally, the scientist in charge has blamed it on ‘climate change.’

The study, entitled BaySys, is a $17-million four-year-long program headed by the University of Manitoba. It was planning to conduct the third leg of its research by sending 40 scientists from five Canadian universities out into the Bay on the Canadian Research Icebreaker CCGS Amundsen to study “contributions of climate change and regulation on the Hudson Bay system.”

But it had to be cancelled because the scientists’ icebreaker was required by the Canadian Coast Guard for a rather more urgent purpose – rescuing fishing boats and supply ships which had got stuck in the “unprecedented ice conditions”.