Drifting Back to Diesel Power


To view or print the whole newsletter plus images click: 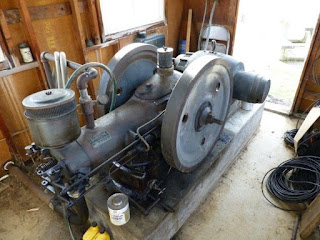 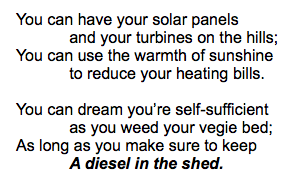 When I was a kid on a dairy farm in Queensland, we relied on green energy - horses and human muscles provided motive power; fire-wood and beeswax candles supplied heat and light; windmills pumped water and the sun provided solar energy for growing crops, vegies and pastures. The only “non-green” energy used was a bit of kerosene for the kitchen lamp, and petrol for a small Ford utility. We were almost “sustainable” but there was little surplus for others.

Our life changed dramatically when we put a thumping diesel in the dairy shed. This single-cylinder engine drove the milking machines and an electricity generator which charged 16 lead-acid 2 volt batteries sitting on the veranda. This 32 volt DC system powered a modern marvel – bright light, at any time, in every room, at the touch of a switch. This system could also power Mum’s new electric clothes iron as long as someone started the engine for a bit more power.

There were no electric self-starters for diesels in those days – just a heavy crank handle. Here is the exact model which saved us from a life of dairy drudgery, kerosene lights and Mother Potts irons:

But all that effort, noise and fumes were superseded when every house and dairy got connected to clean silent “coal power by wire”, and coal was used to produce coke for the new slow-combustion stoves. Suddenly the trusty “Southern Cross” diesel engines disappeared from Australian sheds and dairies, AGA cookers displaced the old smoky wood-burning stoves in the kitchen, and clean-burning coal gas heaters replaced dirty open fires in the cities.

In just one life-time, human energy, wood, candles and kerosene were replaced by diesel, which was then replaced by coal via coal-gas, coke, and clean silent ever-ready electricity.

Today, after Aussies have enjoyed decades of abundant reliable cheap electricity from black coal, brown coal and hydro, green energy gambling has taken Australia back to the era which kept a diesel in the shed.

Tasmania is the greenest state in Australia. It once had a vibrant economy that created mines, saw-mills, farms, orchards, oil and metal refineries, dams, hydro-power and railways. It is now a green no-go land. Greens have stopped new hydro developments, opposed mining, crippled the timber industry, prevented new wood-chip developments and will probably celebrate when their last refinery closes.

Tasmanians get their electricity mainly from hydro assets created long ago by their more productive ancestors. But recently a long drought caused a shortage of Tasmanian hydro-energy - they became reliant for up to 40% of their electricity needs on the Bass-link undersea cable bringing electricity from reliable coal-fired stations in Victoria and NSW. However the overloaded Bass Link cable failed, and an old gas-powered station was brought back into service (importing gas from Victoria) to keep the lights on. Subsequently their politicians hurriedly put 150 diesel generators in their shed (costing A$11 million per month).

Tasmania puts some diesels in the shed:http://www.abc.net.au/news/2016-06-08/hydro-tasmania-to-decommission-diesel-generators-basslink-fixed/7492078

South Australia is the next greenest state in Australia, hosting about 35% of Australia’s wind turbines. These were force-fed into existence by mandatory green energy targets and tax benefits. In a burst of green destruction they also closed their gas-fired power stations and demolished their coal-fired station. However wind power failed recently and a storm tore down their life-line bringing reliable coal power from Victoria. Now Premier Weatherill is planning to install up to 200 megawatts of diesel generators in his shed. Many residents are following his lead.

As some wag said:
Question: “What did South Australians have before candles?”
Answer: “Electricity”.

South Australia puts some diesels in the shed:
http://www.danvhp.com.au/2017/03/jays-green-credentials-burned-by-diesel-generators/

The UK has been badly infected by the green energy virus. Engineers warned that this intermittent and unpredictable supply had increased the risk of blackouts, so the UK government offered subsidies for emergency backup power. This subsidy, plus consumer concerns, put so many diesels in British sheds that they now provide a major backup capacity for UK electricity.

See:    UK offers subsidies to put some diesels in the shed:https://www.theguardian.com/environment/2015/may/06/uk-energy-bill-subsidies-driving-boom-in-polluting-diesel-farms

Many Spaniards found a diesel in the shed was very profitable. Their government had been drinking green-ale and offered attractive subsidies for solar power produced.

The subsidy was very successful - so successful that someone eventually noticed that some suppliers were even producing “solar” power at night. It was coming from diesels in their sheds. 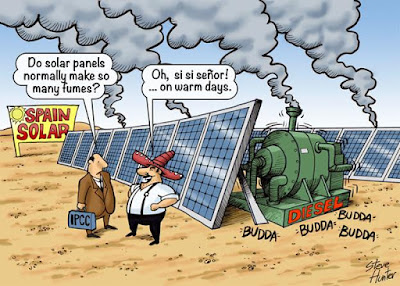 To view or print the whole newsletter plus images click:
http://carbon-sense.com/wp-content/uploads/2017/04/diesel-in-shed.pdf

See:    The Sun in Spain shines better at night:
http://www.theecologist.org/News/news_round_up/465409/spanish_nighttime_solar_energy_fraud_unlikely_in_uk.html

Finally, our green media likes to feature some green energy enthusiast who is “off the grid”. But it usually emerges later in the show that there is a diesel in their shed too.

Those who remember the days of relying on a noisy smelly diesel in the shed and a smoky wood stove in the kitchen have no wish to be dragged back there by green zealots.

To comment on anything said in this article please go to our site – it is now open for comments: http://carbon-sense.com/2017/04/20/diesel-in-shed/

We get no help from the GreenBC’s, and little from the main stream media, so please also patronise the blogosphere (the media of tomorrow) especially the sites that help us. Here are some:http://www.americanthinker.com/blog/2017/04/australias_green_delusions_a_diesel_in_the_shed.html

All about diesel back-up Generators:
http://www.aip.com.au/pdf/Diesel_fuel_Back-up_Generation.pdf


The Problem with Wind Power

The problem with wind power is that electric utilities have to be prepared at any time for wind power production to stop on short notice. So they must keep fossil fuel plants on hot standby - burning fuel but not producing any power. Storage technologies and the use of relatively fast-start plants like gas turbines mitigates this problem but does not come close to eliminating it.

The Power Plan that Greens Built

“We need batteries To drive the pumps To supply the water To smooth the bumps In the power plan That greens built.”


Please make sure we are an allowed sender (“white listed”) or your spam checker will stop us and you may never know. Please let us know when you change your email address or if you have not heard from us in ages.

The increase in CO2 is not due to humans

The increase in CO2 is not due to humans, therefore alarmism and all the money spent on it has no basis.
Anthony Cox

This is a key issue: whether humans are responsible for all or most of the increase in atmospheric CO2. If they are not then it does not matter if alarmists believe that CO2 is the dominant greenhouse gas, which it is not because the increase is natural. Human CO2 is a very small % of the total CO2 going into the atmosphere, The % of human CO2 going into the atmosphere is shown by Figure 7.3, AR4, 3.67% (218.2 GT divided by 8 GT):
Figure 7.3 AR4: 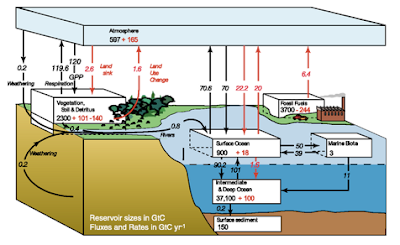 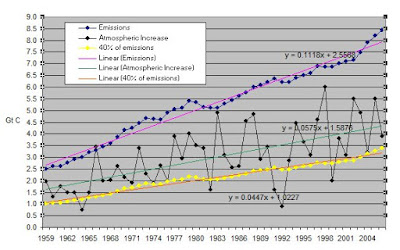 From the measured delta-13-C values in atmospheric CO2 we can by isotopic mass balance also calculate that the amount of fossil-fuel CO2 in the atmosphere is equal to or less than 4%, supporting the carbon-14 "Suess Effect" evidence. Hence the IPCC model is neither supported by radioactive nor stable carbon isotope evidence (Segalstad, 1992; 1993; 1996).

that while fossil fuels are richer in C12 than the atmosphere, so too is plant life on Earth, and there isn’t a lot of difference (just 2.6%) in the ratios of C13 to C12 in plants versus fossil fuels. (Fossil fuels are, after all, made in theory from plants, so it’s not surprising that it’s hard to tell their “signatures” apart). So if the C13 to C12 ratio is falling (as more C12 rich carbon is put into the air by burning fossil fuels) then we can’t know if it’s due to man-made CO2 or natural CO2 from plants.