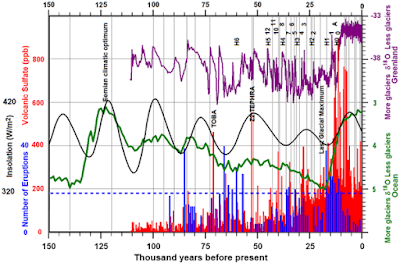 Mike Haseler, also known as blogger the Scottish Sceptic, has issued a Press Release claiming that he


has found evidence that a massive increase in volcanic activity at the end of the ice-age triggered runaway global warming turning the earth from a frozen wasteland in the flourishing interglacial landscape we see today.
This volcanic activity he claims was caused by a runaway chain of events. First, a small change in earth’s orbit caused warming of the earth’s surface and crust. The crust then expanded forcing huge volumes of carbon containing rock to be forced down into the hot magma beneath the earth. The super heated rock then decomposed releasing enormous volumes of gases including sulphur and the potent greenhouse gases of CO2 and H2O.

When these entered the atmosphere they caused the planet to warm further, creating a vicious cycle of more expansion causing more rock to be thrust down into the crust and more greenhouse gases to be released. (link)