DiCaprio considers his eyebrows more important than the planet. 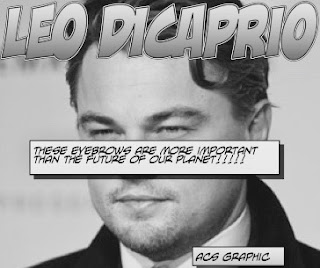 Leonardo DiCaprio took time out from his usual movie-making duties to front a powerful film about climate change called Before The Flood.

Poor deluded Leo travelled the world, from Greenland to India, to produce his doco. As your blogger is one who knows that the #agwHoax is a fraud, I believe that his jetting around the world is creating more carbon dioxide (note Carbon dioxide, not carbon as all the deceivers say) which is greening the planet. (link) (link) (link) etc, etc, etc.

However, if Leo is sincere, wouldn't he curtail his jetting around the world and use facetime or

But, here is DiCrapio's greatest hypocrisy:

Leo flew eyebrow artist 7,500 miles to do their brows for the Oscars


How much effort do you put into the appearance of your eyebrows? Tinting? Threading? Pencilling in? Plucking the strays? Or perhaps nothing at all?Well if you’re an A-lister with the eyes of the world watching, it seems no length is too extreme to ensure your brows are perfect.
Australian eyebrow-artist to the stars Sharon-Lee Hamilton was flown from Sydney to Los Angeles to tend to a select few celebrities’ brows before the 2017 Oscars.

Well done to Aussie Sharon-Lee Hamilton who must have an amazing talent.

However, is Leo so vain that he thinks, (under his warped AGW belief) that he is more important than the planet?

Does he believe that his eyebrows are more important than the future of the planet?