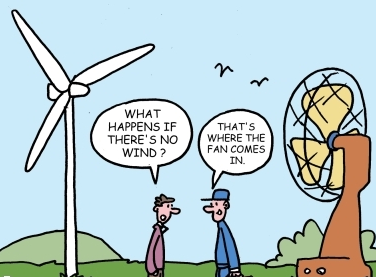 Terry McCrann, writing for the Herald Sun, reveals the truth about renewable energy:

The experts lie about renewable energy

THE first and most important thing to understand about global warming true believers and the pushers of so-called “renewable energy” is that they lie.


Terry says that the International Energy Agency (IEA) used to be "a sober international agency, comprised of real energy experts and built on old-fashioned expertise."

However, as Terry says, they 'succumbed to the “greatest moral challenge of our time” more accurately known as Global Warmism. Kool-Aid became the house beverage not of choice but of mandatory consumption.'

And speaking of consumption, they 'claimed' that


“Renewables have surpassed coal last year to become the largest source of installed power capacity in the world.”


It is a claim so utterly ludicrous, so instantaneously false, that in any other context it would be stunning and a generator of endless ridicule.

It’s tantamount to claiming electricity-powered cars have overtaken petrol-driven ones on the world’s roads. 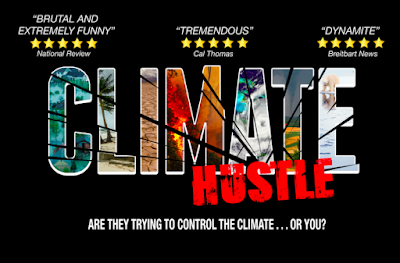 Scorching temperatures. Melting ice caps. Killer hurricanes and tornadoes. Disappearing polar bears. The end of civilization as we know it! Are emissions from our cars, factories, and farms causing catastrophic climate change? Is there a genuine scientific consensus? Or is man-made “global warming” an overheated environmental con job being used to push for increased government regulations and a new “Green” energy agenda?

CLIMATE HUSTLE answers these questions, and many, many more. Produced by CFACT and CDR Communications in the one-of-a-kind entertaining and informative style that has made CFACT’s award-winning ClimateDepot.com one of the world’s most sought after sources for reliable, hard-to-find facts about climate issues, this groundbreaking film tears the cover off of global warming hype, and exposes the myths and exaggerations of this multi-billion dollar issue.

CLIMATE HUSTLE, hosted by award-winning investigative journalist Marc Morano, reveals the history of climate scares including global cooling, debunks outrageous claims about temperatures, extreme weather, and the so-called “consensus;” exposes the increasingly shrill calls to “act immediately before it’s too late,” and in perhaps the film’s most important section, profiles key scientists who used to believe in climate alarm but have since converted to skepticism.


Climate Hustle' is now available locally & will be shown to those interested on two consecutive Thursday evenings in December 2016 for up to 30 pre-booked guests at time.

Venue:           As below in a private conference room with ample FREE car parking nearby.

Advance bookings essential since seating (theatre style) is limited on either the 1st Dec or 8th Dec, 2016.

Join us for dinner at Tigers On The Park most Thursdays from 6:30pm

Celebrate CO2! - There should be more of it!