Eating Insects is just not cricket! 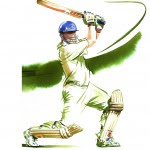 From the Urban Dictionary:


it's just not cricket
Australian slang: Having something that is unjust or just plain wrong done to someone or something.This comes from the game of cricket which is regarded as a gentleman's game where Fairplay was paramount.
1st person: Did you see that guy punch that other guy. 2nd person: yeah, it's just not cricket.


On a page called Climate Home, a writer, talking about preparing crickets for food, Keiran Cooke (no, I did NOT make that name up) tells us:


Eating insects may not be to everyone’s taste, but crickets have for centuries been eaten in many parts of the world − particularly in Asia Pacific region countries, where they are seen as a nutritious snack food, containing far more iron than spinach and other greens.

And scientists say that eating insects such as crickets can also help slow global warming.

WOW! No global warming for around 21 years, so someone must have had a belly full of crickets.

What reason does Mr. Cooke give?


Scientists are working on alternatives to methane-belching cattle for growing meat demand.

Unfortunately, Mr. Cooke's science is crook. That is just not cricket, Mr. Cooke.


Dr Gerrit van der LIngen explains why emissions of methane from cattle and sheep should not be part of any emissions trading system in New Zealand. According to MAF, 98.7% of agricultural methane comes from ruminant enteric fermentation, released by burping; and is part of a natural closed loop that has nothing to do with fossil sequestered carbon. (LINK to download pdf)