Lovelock: Our Planet's in the best of Hands 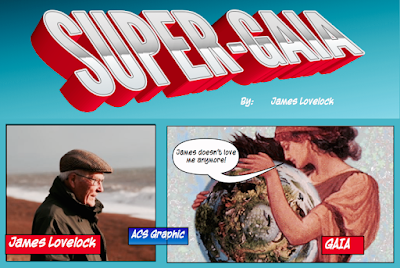 This blog has written before about Tim Flannery's devotion to Gaia.


Well Gaia is our earth, this extraordinary living organism of ours that we’re all part of and just breathing now, talking we are plugged into Gaia aren’t we? We are, we taking the atmosphere into our bodies, we’re changing its chemical composition and we’re exhaling it.

Meanwhile, the creator of GAIA, James Lovelock after turning his back on GAIA, turned his back on his theory of man made Global warming (AGW):

Marc Morano of Climate Depot reports:MSNBC, perhaps the most unlikely of news sources, reports on what may be seen as the official end of the man-made global warming fear movement.

MSNBC April 23, 2012: 'Gaia' scientist James Lovelock reverses himself: I was 'alarmist' about climate change & so was Gore! 'The problem is we don't know what the climate is doing. We thought we knew 20 years ago'

In case the alarmists are not sure that James Lovelock has turned his back on AGW, as the 96 year-old new Patron of the Dorset Wild Life Trust  has made the following statements:


When asked, should we try to save the World, James Sadi (bold added)


“Don’t try and save the world, it’s pure hubris. We might be able to save Dorset. I don’t know how we do it. It’s up to us. I think it’s easier to save Dorset than the planet.”

“There’s one thing to keep in mind here. We don’t need to save the planet, it’s looked after itself for four billion years. It’s always been habitable and things have lived on it, so why worry.”