Pauline Hanson and Q & A (and Update) 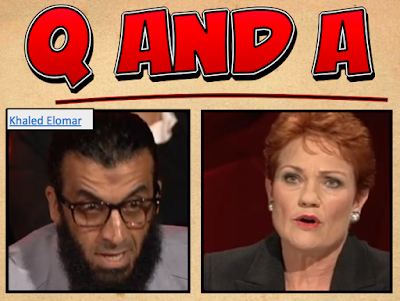 Pauline Hanson, newly elected to the senate with up to 6 other One Nation candidates, appeared on Q & A on the 18 July 2016. No one can question her courage. But, as with every other Q & A, any view not approved by the hard left/Green was going to have a hard time. Tony Jones and the other 4 panellists, Simon Birmingham of the coalition, the smug Larissa Waters of the Greens, the very circumspect Nick Xenophon and Sam Dastyari of the ALP, all in their own way attacked Hanson. Of course the MSM took an anti-Hanson approach and before the program left wing protestors outside the ABC again demonstrated their support for free speech by trying to stop the program from going ahead.

Dastyari in particular took every opportunity to attack Hanson’s so-called hate speech. The moment of the night was when a reminiscing Dastyari said he was from Iran. Hanson asked him if he was a practising Muslim. Dastyari would not answer. Apparently he is an atheist which means under Islamic law he is an apostate. Apostasy is the worst sin in Islam and is punishable by death. No doubt Dastyari was also concerned with alienating the large block of Muslim voters in ALP seats.

Of particular interest was a question from a stern faced Muslim in the audience. His name was