A lesson on less on. 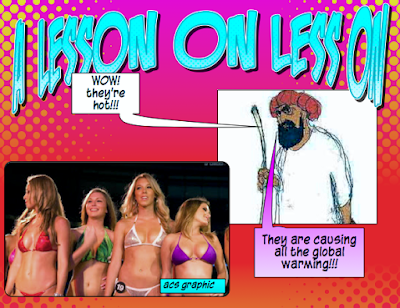 We have many times told you that carbon dioxide has been falsely accused. Now the real reason for climate change has been revealed by, of all things, a Muslim Cleric (link)

In his sermon, Tabatabi-nejad urged Iran’s "moral police" to crack down on "improper veiling" and to do everything they can to keep Iran’s population as moral as possible

It has been revealed that Iran has a 7000 strong undercover police force who police uncovered women.


They're called the Gashte Ershad, the "guidance patrol," and they have broad powers to chastise and even arrest people for failing to meet what might be called the modesty test.

It's women who attract the attention of the Gashte Ershad. Too much hair peeking