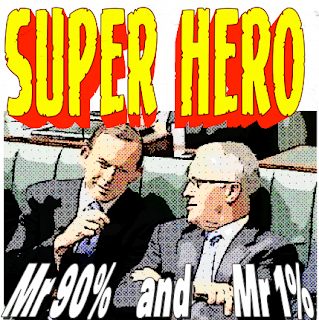 Probably not the most accurate poll due to the bias of his readers.

A poll conducted by Zanetti shows that, of his readers, 90% want Tony Abbot to be Prime Minister.

Poor Malcolm gets only 1%; whilst the man who MT has been tricking, ScoMo is only rating slightly above Malcolm (actually double MT's rating) with 2%.

Interesting - the two candidates below Tony Abbot are the

The ALP's Bill Shorten and Tanya Plibersek's combined vote at 0% is one percent (1%) below Buffoon Clive Palmer. How can a buffoon out-rate Labor's leader and deputy leader. 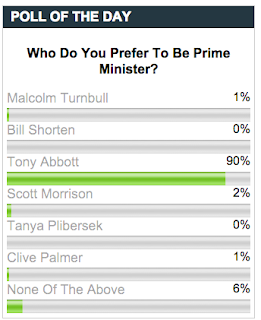 The National Party Should Split with Turnbull's Left Leaning Liberals. 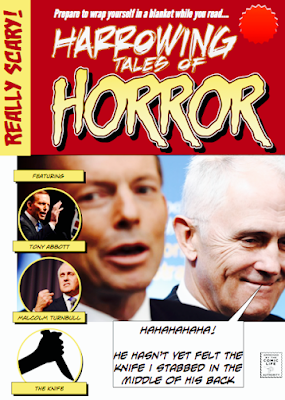 On Malcolm Turnbull's knife in the back coup, the Nationals negotiated a new Coalition agreement.

THE Nationals have notched up some big wins in a new Coalition agreement negotiated after Malcolm Turnbull toppled Tony Abbott.

For the first time, the agreement includes a side letter outlining policy directions for the future, in an apparent bid to protect the party’s platform from the more moderate Mr Turnbull.

It includes assurances that there will be no change of policy on some of the most controversial issues of the day, including same-sex marriage and climate change, which is a move designed to appeal to the party’s traditionally conservative voter base.

"In my opinion there are some things that are very important to the National Party, I envisage they will be discussed," he said, and cautioned Mr Turnbull not to take the party for granted.

"Surely Tony Abbott was more to the right than Malcolm Turnbull so for balance I think there is a very important role for the Nationals to play in the future."

It did not take Malcolm Turnbull long, despite Senator William's warning not to take the Nats for granted, to turn his back on the Abbott government's policies. Particularly on "Climate Change" policies.

Initially in smaller items but then in one whopping One Billion swoop.

Malcolm Turnbull will set up a $1 billion fund to spur investment in renewable energy in a move that offers his first major policy on climate change since becoming Prime Minister, answering Labor taunts about his personal conviction on global warming.

The funding will be spread over a decade and will draw on part of the borrowings meant to support the Clean Energy Finance Corporation, a $10bn scheme that Tony Abbott vowed to scrap but which will be retained.

The new statement will make it clear that an Abbott Government bill to dismantle the CEFC, which has been rejected twice and is a trigger for a double-dissolution election, will be abandoned so that the finance corporation will remain.

The Delcons could be a big factor in the forthcoming Federal Election.

The elephant in 2016 is the ferocious boiling anger among betrayed conservatives and small government libertarians, divided over whether they can bear to vote for Turnbull (a Liberal*) who has been called the best leader the Labor Party never had. Delcons was tossed at the so-called “Delusional” Conservatives. But they took up the badge. Defcons means the Defiant ones.

Joanne later tried to assess the number of the voters who are disaffected by Turnbull's swerving to the left:


There are 15 million voters enrolled in Australia. If  4% of Liberal-Nat voters are Delcons, that’s about 2% of the total voter pool or 300,000 people who don’t matter. And that’s a conservative, pardon the pun, estimate. Another 10% of Liberal voters said they are “a little less likely” to  vote for the Liberal Party at the next election. These voters are not lost from the leftie end of the Liberal Party fan club. Potentially there are another 750,000 who could be convinced to instead vote National, ALA, Lib Dem, Family First or some other option should it appear.

While the new Coalition agreement remains in place, the DelCons (and the DefCons) cannot vote National in seats where the Liberal Party is fielding candidates. If the Nationals declare that the Coalition agreement has been broken by the Turnbull government's actions, they then could campaign in many more seats. That would give many of the DelCons a large established party to vote for.

Because of the distrust of Malcolm Turnbull by these voters, the Nats could possibly become a party with more seats than Turnbull's Liberal Party.

Wouldn't it be ironic if the Liberals, tugging their forelocks, came cap in hand to the Nationals, wanting to become the junior partner in a newly formed Coalition?

Over to you, Barnaby.