97% of the country is aware that 97% of climate change scientists are trying to scam them. 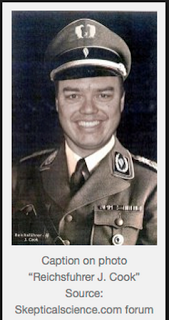 Agnotology is the study of how ignorance arises via circulation of misinformation calculated to mislead. Legates et al. (Sci Educ 22:2007–2017, 2013) had questioned the applicability of agnotology to politically-charged debates. In their reply, Bedford and Cook (Sci Educ 22:2019–2030, 2013), seeking to apply agnotology to climate science, asserted that fossil-fuel interests had promoted doubt about a climate consensus. Their definition of climate ‘misinformation’ was contingent upon the post-modernist assumptions that scientific truth is discernible by measuring a consensus among experts, and that a near unanimous consensus exists. However, inspection of a claim by Cook et al. (Environ Res Lett 8:024024, 2013) of 97.1 % consensus, heavily relied upon by Bedford and Cook, shows just 0.3 % endorsement of the standard definition of consensus: that most warming since 1950 is anthropogenic.

The Crook Cook is back and is trying to prop up his phoney "97% consensus."


But the damage had already been done. Opponents of climate action had spent years casting doubt on the scientific consensus.

John, you should tell your University students that "scientific consensus" is an oxymoron.
The title of this post is a beautiful quip in the comments below Cook's latest comic creation.

That last comment above is from Astrophysicist Gordon Fulks who continues:

Of course Cook is not talking about real science, just real politics. Climate science has become a backdrop for his political activities. He even has a website devoted to all the political talking points he can accumulate on this subject, without regard for their accuracy.

Even Cook's claim of overwhelming scientific support is far from accurate. It is probably correct for those who derive their living from the hysteria but far from correct among the broader scientific community. And among the best and brightest, it faces strong opposition even from those whose politics might otherwise suggest agreement. For instance, Nobel Laureate in Physics Ivar Giaever is a Democrat who supported Obama for President but now strongly opposes his continuing climate nonsense.

What does hold real sway among scientists who put their science first are logic and evidence. As the great Nobel Laureate in Physics Richard Feynman pointed out, theories that fail comparisons with nature are dead. It does not matter how beautiful they are, they are dead.

One such comparison pointed out by former Obama Administration Theoretical Physicist Steven Koonin involved the lack of a warming trend over the last two decades despite continuously rising atmospheric CO2. That is not possible if CO2 is the earth's thermostat.

After another example, Fulks concludes:


Cook does a great disservice to science by turning it into a cheap political game. And politics based on fraud ultimately hurts everyone, especially the poor who suffer most.