Every time a north wind blows hot air over Adelaide, some Chicken Little cries “Global Warming”. And when an El Niño predictably causes a hot year like 1998 or 2015/16, some sensation-seeking celebrity will trumpet “hottest year eevah”.

They are watching short-term weather ripples and waves and ignoring the underlying climate tide. Daily, monthly and yearly temperature records will always be equalled or broken. That is what weather does – it fluctuates.

In the medium term, Earth temperature trends are influenced by variations in solar activities as evidenced by sun-spot cycles. These variations affect solar intensity, cosmic rays, clouds and Earth temperature, causing medium-term climatic events like the Little Ice Age and the Modern Warming. There are persuasive signs that recent solar activity has peaked. So maybe we can expect cooler weather soon.

But to see what the climate is doing we must look longer-term and study the glacial cycles. The Milankovitch cycles of Earth in the solar system control these.

Is it warming or cooling now?

There are many signs that Earth’s climate is gradually cooling (as Prof Carter shows in the video above).

For example, snow and ice is accumulating.

In the Antarctic, Mawson’s Hut and the Colbeck Hut are being progressively buried in ice.

In Greenland, “The Lost Squadron”, which was forced to land on the Greenland Ice sheet in 1942, was rediscovered 50 years later buried under 268 feet of ice. 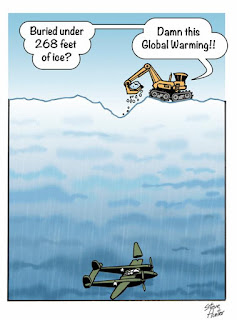 We live in the Holocene warm interval within the Pleistocene Ice Age – a time of recurring cycles of ice separated by brief warm interludes. Earth’s climate is driven by solar system cycles, and climate changes appear first in the Northern Hemisphere which has more land in the sensitive sub-polar regions. The GRIP ice core from Greenland shows the long-term average temperature there peaked 7,000 years ago and has trended down for at least 3,000 years. 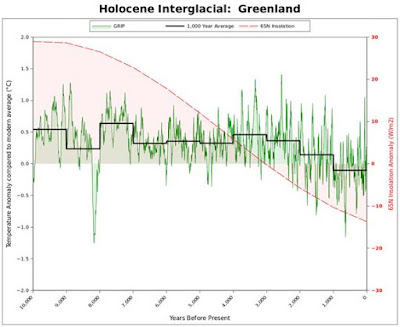 Greenland is now cooler than 8000 year ago:
http://carbon-sense.com/index.php?s=guy&Submit=Go

We will still have hot days and heat waves, El Niño will still bring droughts and floods, sea ice will come and go, but the climate mid-summer has passed and the temperature tide is going out. Spreading alarm about short-term temperature fluctuations of a fraction of a degree is a distraction.

No warming for 58 years:
http://realclimatescience.com/2016/03/noaa-radiosonde-data-shows-no-warming-for-58-years/

Promoting damaging energy and land management policies designed to prevent warming, just as the next climate winter approaches, will be seen by future generations as bizarre.


Poverty and the Environment

Desperately poor people focus on feeding their family and have no spare energy to support secondary concerns such as the environment.

Today’s green policies are reversing these centuries of progress. They are restricting mining, farming, forestry, fishing and heavy industry by delaying approvals, denying access to land, increasing taxes and the dole, and making electricity more costly and unreliable.

Western recession and UN promotion of green energy will also increase poverty in the third world where swelling populations will further degrade their environment.

This is an omen, not a signal to celebrate.

In peacetime, societies may survive without making “things” providing they have valued skills, assets to sell or barter, or savings in sound currencies. But during military or financial crises, “things” may not be available unless they are made locally. Then we must rely on the primary producers of new wealth - miners, farmers, foresters, fishermen, engineers, builders, tradesmen and skilled workers.

Back in war-torn 1943, Australia had ration cards for petrol, food and clothing, and insufficient copper to make cartridges for our own defence.

Now, because of the war on carbon, Australia will soon have no oil refineries to produce fuel and lubricants for our tractors, ships, tanks and cars. Mines and base-load power plants are closing. There are fewer smelters and refineries producing steel, copper, aluminium, lead or zinc, and no factories making engines, rifles, ships, planes, cars, trucks or dozers. Our children are more skilled in soft options and electronic gadgetry than in maths, science and engineering; too many despise trades, soldiering, farming and manual work. 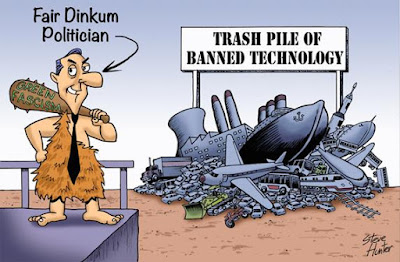 This industrial decay will become obvious one still, dark, winter evening when wind turbines stand idle, solar panels have logged off, batteries are flat, and overloaded standby generators fail. There will be no power for trains, lifts, heaters, stoves, fridges, traffic lights, retail checkouts or electronic money. With every addition of intermittent electricity (wind/solar), and every closure of reliable base-load power (coal), this blackout danger increases.

Real estate speculation, bureaucracy, parliamentary debates, games, entertainment, and arts are froth on the river of basic industry where things are made.

That river is running dry.

South Australia to close 40% of its base load power:
https://www.google.com.au/url?sa=t&rct=j&q=&esrc=s&source=web&cd=1&cad=rja&uact=8&ved=0ahUKEwjc1amcm6XLAhWIJJQKHS1aCrMQFggeMAA&url=http%3A%2F%2Fwww.smh.com.au%2Fbusiness%2Fenergy%2Falinta-to-shut-sa-coal-mine-power-plants-early-20151007-gk32q6.html&usg=AFQjCNGz38Gc9zz6RCF5xj9qucv9OjEcOg

Prepared for The Carbon Sense Coalition by Viv Forbes and volunteer helpers.

Please make sure we are an allowed sender (“white listed”) or your spam checker will stop us and you may never know. Please let us know when you change your email address or if you have not heard from us in ages.
Posted by Geoff on April 13, 2016 No comments: