How to Scam the System & Disadvantage Political Opponents by ‘Giving the Power Back to the People’, all in the Interests of ‘Democracy’ 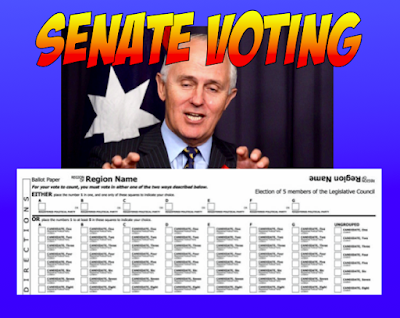 As Prime Minister Malcolm Turnbull points out, the current voting system created by the major parties 30 years ago is so corrupt and undemocratic it must be changed urgently:

“We know that what has been happening with the Senate voting system has been anything but democratic and anything but transparent….. the government has introduced legislation to reform the Senate voting system. It will simplify the ballot paper and stop the gaming of the system by preference whisperers and backroom deals ……Voters had no idea where their preferences were going to go, and, in reality, many of the outcomes of the Senate election did not fairly reflect the wishes of the people”

In other words, the current electoral rort which was introduced by, and was exploited by, the major parties for 30 years to subvert democracy and consolidate their monopoly on power, must now be