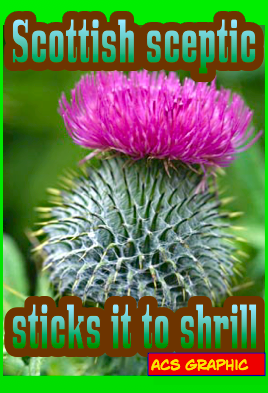 This is interesting because the RagMag New Scientist has predicted that 2016 will be the hottest year ever - hotter that the MWP, the Roman Warming, even hotter that the Holocene Climate Optimum. Even the British Met " recently forecast that 2016 could be “at least as warm, if not warmer” than 2015"

Back to the RagMag New Scientist's prediction that 2016 will be the hottest year . It appears that, through Marc Morano's ClimateDepot, Kevin "Travesty" Trenberth is guessing (is guessing scientific, Kev?)

that 2016 may not be warmer than 2015, He thinks the current El Niño may already have begun to peak (or have peaked) and thus that the second half of 2016 may cool down again somewhat.


...despite it usually being something we sceptics leave to idiot alarmists to do, for a while I’ve been telling anyone who wants to listen that this year is more than likely to see global cooling because three separate (possible) trends are adding together:

A solitary Scottish Sceptic sticks it too all the shrill who are predicting ever increasing warming.