Climate Sceptic Malcolm Roberts warns that a carbon tax will start the day before the election.

Malcolm Roberts was recently interviewed by 2gb's Alan Jones. Alan introduced Malcolm by saying he knew more about climate change than anyone with the possible exception of Lord Monckton. Alan went on to say that the hoax was costing all of us a lot of money.

Malcolm opposes all taxes on carbon dioxide because hard measured data show that CO2 is not causing warming. 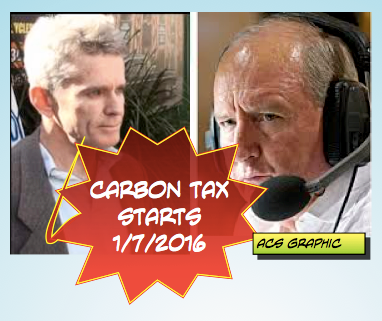 How dare they? And why aren't the media talking of this after two election have been fought and won on getting rid of the carbon dioxide tax.

Malcolm has issued a press release for Queenslanders. However the One Nation policies are nationwide.

After eight years of my investigating, speaking out publicly, and holding members of parliament accountable, Pauline Hanson invited me to join her on the Queensland senate ticket for the federal election on 2 July.

She is not as the media and political opponents have portrayed. Pauline is intelligent, quick, honest, courageous and persistent. We are passionate about bringing back our country.

What we stand for in nine sentences: http://www.onenation.com.au/principles

If you’re a Queenslander please vote for us. If you have Queensland friends or family please forward this email.

How to vote cards for all states and seats with Pauline’s candidates: http://www.onenation.com.au/vote

Please help us to speak out on the floor of parliament and to restore integrity to parliament.

And When I asked the Nationals whether they passed the Bill, they denied it.