To view this in your browser with all images:
http://carbon-sense.com/wp-content/uploads/2016/05/energy-deniers.pdf

When man first appeared on Earth he had no implements, no clothes, no farms and no mineral fuels – his only tools were his brains, hands and muscles.

Everything that enables mankind to live comfortably in a world where nature is indifferent to our survival has been discovered, invented, mined or created by our inventive ancestors over thousands of years.


The history of civilisation is essentially the story of man’s progressive access to more efficient, more
abundant and more reliable energy sources - from ancestral human muscles to modern nuclear power.

There are seven big steps on the human energy ladder –


Man’s first and greatest energy step was discovering how to harness fire for warmth, cooking, hunting, metal working and warfare.

For centuries the main fire-energy fuels were organic natural resources such as wood, charcoal, peat, grass, animal dung and fats/oils extracted from animals and plants. As human population increased, these energy sources became scarce as the land and seas around towns and villages were stripped of their natural carbon fuels.

The second step on the energy ladder was built when some smart hunter/gatherers discovered how to access more reliable energy from domesticated animals and plants. Sheep, cattle, goats and pigs provided a steady supply of carbon-based food energy, and dogs, horses, donkeys and camels multiplied human energy for transport, hunting and warfare. Farmers also nurtured fruiting trees and grasses such as einkorn, wheat, rice, barley, oats, corn and sugar cane. These provided more dependable and abundant food energy for humans and their animals.

About this time humans ascended the third step on their energy ladder – the ability to harness wind/hydro/solar power for sailing ships, windmills, water-wheels, grain mills and drying food. The low energy density and unpredictability of these weather-dependent energy sources was obvious, even to our ancestors. 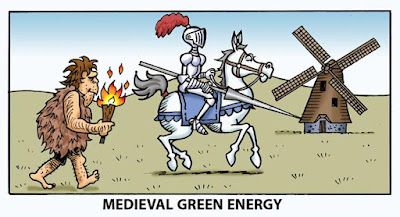 The fourth big step was the invention of gunpowder by the Chinese, which gave humans the first glimpse of the enormous power of concentrated chemical energy. This led to the widespread use of explosives for hunting, armaments, mining, civil engineering and entertainment.

The fifth energy step was a bigger one - the discovery of how to obtain and use coal, and centuries later, oil and gas. The energy density and abundance of these hydro-carbon fuels gave an enormous boost to human access to energy, and massively relieved the pressure on forest fuels and animal fats.

The sixth step on the energy ladder was truly gigantic - British inventors and engineers built the first practical steam engine. That invention transformed the world. Suddenly steam engines were moving trains and ships, pumping water, generating electricity and powering factories, traction engines and road vehicles. Most steam engines were driven by coal, but wood, other hydro-carbons, concentrated solar energy or nuclear power could be used.

Steam cars and electric cars got a good work-out over 100 years ago, but neither could compete with a new invention - the oil-powered internal combustion engine. This small but powerful engine resulted in the replacement of steam and electric motors for mobile engines but the mighty steam engine still dominates electricity generation. 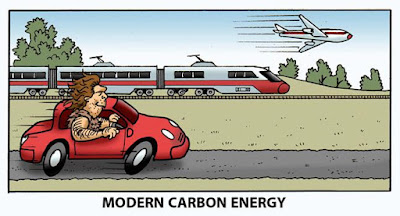 These two engines, running on powerful hydrocarbon fuels, feed and mobilise our world. The transformation is remarkable. Just 3-4 generations ago, a team of up to twenty bullocks took days or weeks to haul a wagon-load of wool bales, forest logs or bagged wheat to markets, and the bullocks needed fresh supplies of feed and water every night. In 1896, Henry Lawson described it well in two stanzas from his great Australian poem “The Teams”:

A cloud of dust on the long white road,And the teams go creeping onInch by inch with the weary load;And by the power of the green-hide goadThe distant goal is won.

But the rains are heavy on roads like these; And, fronting his lonely home, For weeks together the settler sees The teams bogged down to the axle-trees, Or ploughing the sodden loam.


Cattle and sheep to feed the cities were moved by drovers who spent weeks or even months on the road. Today one diesel-powered road train or semi-trailer can carry its own fuel and water plus a load of livestock to the distant cities in a day or so. Refrigerated trucks do even better – swiftly carrying dressed sides of meat from the abattoir direct to butcher shops.

The seventh step in the human quest for additional energy was the harnessing of atomic energy for generating electricity, fuelling naval vessels, in medical procedures and creating even more powerful explosive devices.

As mankind was ascending the seven steps of the energy ladder from the stone-age to the nuclear age, governments were also expanding their scope, power and cost.

Mankind has always had tribal leaders, but when farming developed, leaders or powerful land-owners discovered that other farmers and their fixed assets could easily be taxed to pay for their own “protection”. This encouraged the development of central governments with their officials, tax collectors, police and soldiers. To defend their generally increasing appetite for tax revenue, governments needed a continual supply of real or imagined dangers to justify their taxes. From this point on, government power has increased with each real or invented community crisis – from village control, to district, state, federal and continental governments. The latest such “crisis” concerns “global warming” or “the climate crisis”, which is being milked to promote global carbon taxes and global government.

Humans flourished in the warm eras and suffered in the cold dry eras. Access to abundant, reliable energy enables man to survive these and the future climate challenges which are sure to come.

Today’s massive global human population owes its existence, prosperity and comfort to our economical and reliable energy supplies, particularly the hydrocarbon fuels – oil, coal, and gas. The world supports more people with fewer famines; and those with access to abundant reliable energy supplies have stabilised their populations and contribute most to caring for nature, culture and the poor. And the carbon dioxide recycled by the usage of hydrocarbon fuels is greening the world and adding to food supplies as native and farmed plants flourish in the warm, moist, carbon-rich atmosphere.

This long history of energy progress is now under threat from strong forces using any environmental alarm to deny human access to efficient energy. Using every sensational scare that can be whipped up, they tax, oppose, hamper or restrict farming, forestry, fishing, grazing, mining, exploration, hydro-carbon fuels, steam engines, combustion engines and nuclear power. The “zero-emissions” zealots want us to step backwards down the energy ladder to the days of human, animal and solar power. They have yet to explain how our massive fleet of planes, trains, tractors, harvesters, trucks, road trains, container-ships and submarines will run on windmills, treadmills, windlasses, solar energy, and water wheels. 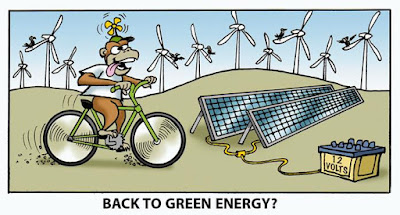 But their energy-destroying policies will reduce global prosperity and population back towards levels prevailing in those times. Some see that as a desirable goal.

These green zealots are the real deniers – the energy deniers.