Wind power just does not cut it

Tony Abbott told the Clean Energy Finance Corporation (CEFC) that there was to be no money for windfarms. It was called "invest," but you should surely get a return on an investment. There will be no return on propping up the wind farm industry.

The new Turnbull administration foolishly has reversed that decision.


Under the new mandate, signed by Mr Hunt and Finance Minister Mathias Cormann on December 3, the $10 billion fund will be allowed to invest in wind projects, as long as they incorporate "emerging and innovative" methods.  (Source)

Dr Dennis Jensen, graduated from Monash University with a PhD in Materials Science and Physics and has worked for the CSIRO as a scientist. Jensen, a member of Turnbull's parliamentary party, disagrees:


"I think that's a bad decision, to be quite frank.

Wind power just does not cut it, and they pretend that they're economically competitive but then they acknowledge that without things like RETs and renewable energy targets and also subsidies, there wouldn't be any more wind turbines built."

A friend of this blog mentioned the deserted Kamaoa Wind Farm at South Point, Hawaii. What a black spot on the landscape. How can true environmentalists support these ugly remnants of a failed fuel source?


South Point is known for its sheer sea cliffs, its strong ocean currents, its open pasturelands, and its whipping winds. But the constant bluster wasn’t enough to keep the Kamaoa Wind Farm going… on Friday (in April 2012), out of the original 37, there was only one left standing. (Source)

Since the windfarm opened in 1987, it has become something of an obsession for Waiohinu resident Lee Terry. Terry has spent quite a lot of time at the sight of the monumental dismantling, capturing the historic moments with his camera.The rest of the toppled windmills now lay in a mountainous heap on the ground, dotting the landscape like crashed aircraft, awaiting their fate as scrap metal. (source) 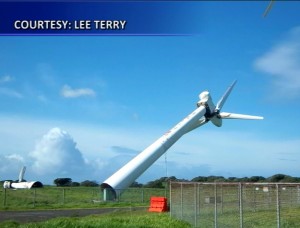 AN industry that cannot stand on its own feet without being propped up by subsidies is not an industry worth investing in. And surely, if that industry is a health hazard, more care should be taken when placing the wind farms.

It has been fairly well established that wind turbine noise can harm health. Like the AGW hoax there have been peer review papers supporting both sides of the debate, however the weight is swinging behind the fact that Wind Turbines cause harm to health. For example, this study published in Noise and Health:

We conclude that the noise emissions of IWTs disturbed the sleep and caused daytime sleepiness and impaired mental health in residents living within 1.4 km of the two IWT installations studied. Industrial wind turbine noise is a further source of environmental noise, with the potential to harm human health. Current regulations seem to be insufficient to adequately protect the human population living close to IWTs. Our research suggests that adverse effects are observed at distances even beyond 1 km. Further research is needed to determine at what distances risks become negligable, as well as to better estimate the portion of the population suffering from adverse effects at a given distance.

Was then PM Abbott right? Or is his back-stabber Chairman Mal right? Did Chairman Mal consider all aspects of this very inefficient creator of energy?

Consider some of the other disasters of the so-called green "renewable " energy schemes. (source Web Ecoist) 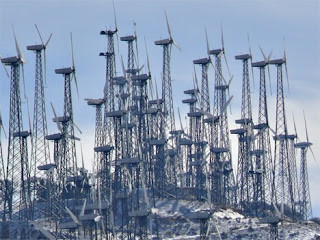 Abandoned in 2002 but California Law does not demand their removal. Do the Green Environmentalists this this is a good looking environment. (Source :American Thinker)

From 1981 through 1985 federal and state tax subsidies in California were so great that wealthy investors could recover up to 50 percent of a wind turbine's cost. The lure of quick riches resulted in a flood of development using new and mostly untested wind turbines. By the end of 1986, when projects already underway in 1985 were completed, developers had installed nearly 15,000 wind turbines. These machines represented 1,200 MW of capacity worth US$2.4 billion in 1986 dollars. (source)

Global Warming is a CROCK 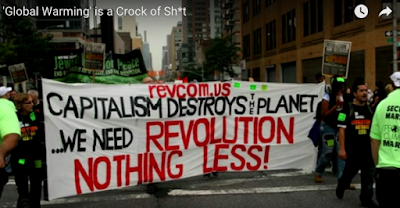 
Global warming alarmists have been proven spectacularly wrong time and time again. So why should we believe them now?


He ends his video with:

The people pushing it (The AGW hoax) have been caught red-handed lying and faking data to prop up the crony and lucrative industry of the man made climate change hoax.


The Paris climate summit is merely a PR exercise to try and revive the discredited fairy tale of man made climate change.