Australia MUST SAY NO to COP21 Climate Treaty 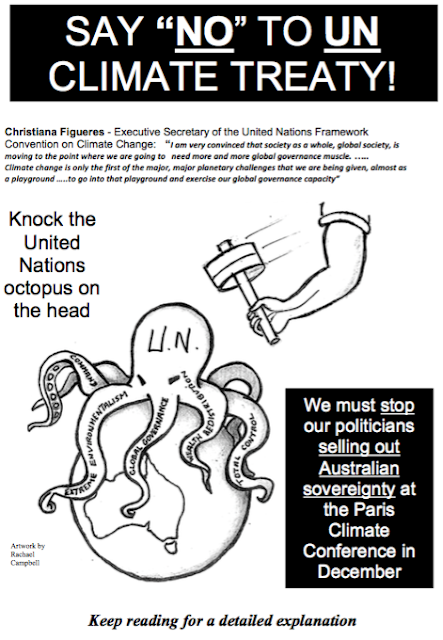 Why say “No” to a new UN Climate Treaty?

David Suzuki, on his eponymous website http://www.davidsuzuki.org/david/ describes himself as


David Suzuki, Co-Founder of the David Suzuki Foundation, is an award-winning scientist, environmentalist and broadcaster.


He is renowned for his radio and television programs that explain the complexities of the natural sciences in a compelling, easily understood way.

On a visit to Australia, as a self confessed scientist,  he showed an amazing ignorance of some basics of climate science. We reported it under the heading

Everyone interested in climate science knows of the main data sets for measuring global temperature; the two satellite data sets, the remote sensing system (RSS) and the set from the University of Alabama Huntsville. The other data sets are NASA’s Goddard Institute of Space Studies (GISS) and from the Hadley climate research unit the  two HadCRUT sets with different methods of tweeking - HadCRUT3 and HadCRUT 4.

David Suzuki has made a career out of travelling the world pushing the alarmist view of climate change.

Surely then he would be aware of these global temperature data sets. And yet on QandA last night (23/9/2013), when asked about them by Bill Koutalianos, he seemed to be unaware of them.


Suzuki: ...yeah well don’t know how, er where er why you’re saying that. The 10 hottest years on record as I understand it have been in this century. In fact the warming continues, it may have slowed down but the warning continuous and every body is considering some sort of revelation in the next IPCC reports that are saying we got it wrong - as far as I understand – we haven’t. So where are you getting your information? I’m not a climatologist. I wait for the climatologists to tell us what they're thinking.

Bill: UAH; RSS, HadCruT, GISS- data that show a 17 year flat trend (now around 20 years - ed)which suggests there may be something wrong with the CO2 warming theory.

Bill:Well, they’re the main data sets that IPCC uses…. Those Data sets show a 17 year flat trend which suggest there may be a problem with (See video below)

At this point Suzuki interrupted

Suzuki: There may be a climate sceptic down in Huntsville Alabama who has taken the data and come to that conclusion.

The fact that a salesman explaining the "complexitites of science" was unaware of the data sets that climate scientists use is more than amazing.

More up to date, recently Suzuki falsely stated that Realist organisations are funded by BigOil (link)


Part of the problem is that fossil fuel interests spend enormous amounts of money to sow doubt and confusion, often by funding or setting up organizations like the Heartland Institute in the U.S., the Global Warming Policy Foundation in the U.K., Ethical Oil and Friends of Science in Canada, and the International Climate Science Coalition, based in this country but affiliated with similar organizations in Australia and New Zealand and with close ties to Heartland. .......


David Suzuki is wrong to imply that the group I lead, the International Climate Science Coalition (ICSC), was set up by “fossil-fuel interests.”

In reality, the ICSC was founded in 2007 by Terry Dunleavy, OBE, of New Zealand. Mr. Dunleavy is a leader in that country’s wine industry. Mr. Dunleavy found that there was such strong worldwide support for the non-partisan, science-based approach of the New Zealand Climate Science Coalition that an international body taking the same tack would be beneficial.

Since I assumed the Executive Director role of ICSC in 2008, the identities of all donors to ICSC has been 100 percent confidential to protect their privacy, and quite frankly, safety. Some of the scientists who advise us on a volunteer basis have had death threats for speaking out against the idea that dangerous climate change is occurring as a result of humanity’s relatively small carbon dioxide emissions. We would not want to risk subjecting the people generous enough to help ICSC cover its modest operating expense to such abuse.

It is ironic that David Suzuki accuses his opponents of being “secretive organizations [that] rarely reveal funding sources” when, according to its2009 annual report, the David Suzuki Foundation (DSF) received $1 million or more from “Anonymous.” According to its 2010 annual report, the DSF received between $10,000–$99,999 (exact amount not listed) from “87215 Canada Ltd.”

Talk about the pot calling the kettle black.

Perhaps Suzuki should learn more about the  complexities of the natural sciences before he tries explaining them in a compelling, easily understood way.

“The 2015 Lancet Commission on Health and Climate Change,” comprising 45 international multidisciplinary academics (29 PhD’s and one MD) headed by Nick Watts (MA), was “formed to map out the impacts of climate change, and the necessary policy responses, in order to ensure the highest attainable standards of health for populations worldwide.” It was released on 23 June and is freely available online here.

The UCL-Lancet Commission on Managing the Health Effects of Climate Change had published a report prior to the Copenhagen Climate Summit of 2009; and this report is timed to precede the Paris Convention beginning 30 November. It has been promoted by Doctors for the Environment Australia (DEA) in Medical Observer and by Jo Hartley’s Editorial in Australian Doctor on 3 July.

Why would a full-time GP critique this Lancet Commissions report? I have had a keen interest in health promotion since the 1970s,[1], [2] in experimental science since the 1980s,[3], [4] in evidence-based medicine since the 1990s and in climate science since the early 2000s.[5] On reading the report, I found it to contain some valuable information and worthwhile suggestions, but also some deficiencies and areas of concern.

Regarding attitudes to climate change, I have observed two polarised positions:


A comprehensive survey of over 1,800 international climate-related scientists in 2012, published by Verheggen et al (2014)[7] and later analysed in detail (April 2015),[8] reveals a great deal of uncertainty and disagreement. I identify with the less vocal middle ground where scientific objectivity is valued more highly than advocacy for a cause.

In critiquing The Weather Makers and Slaying the Sky Dragon, publications representing both extreme positions, I found them wanting in scientific rigor; making unwarranted assumptions and erroneous or extreme statements; cherry-picking data, ignoring inconvenient evidence and mishandling uncertainties. I will leave the reader to judge the 2015 Lancet Commission on Health and Climate Change in that regard. It is certainly not free from confirmation bias – and neither am I.

I take sole responsibility for preparing and publishing this critique; I have received no funding or influence from any source; and I have no conflict of interest other than some Rio Tinto and SILEX shares, held since 1999 in a self-managed super fund and now comprising less than 0.4% of the assets in that fund. As a frugal vegetarian who often cycles to work and elsewhere, I happen to have a modest carbon footprint but no illusions about thereby saving the planet.

In summary, this Lancet Commissions 2015 Report: