I have written before about two absolutely fatal contradictions to alarmism.

The first is that CO2 and temperature are not correlated.

The second is that humans are not responsible for the increase in atmospheric CO2. Knoor, Gloor and Essenhigh show this, as do Pettersson, Salby and Quirk.

These two facts are the death-knell of alarmism but witless politicians and activist scientists at the BOM, CSIRO and academia and a compliant media are keeping the corpse animated.

So for what it’s worth another recent paper has confirmed these two points. The paper is by Jamal Munshi, a researcher at Sonoma State University. Jamal found the usual relation between CO2 and temperature with CO2 following temperature as per Henrys Law.

In addition Jamal finds that the increase in CO2 is not due to human CO2 ie ACO2.

Jamal’s Figure 7 is similar to Quirk’s graph of the relationship between ACO2 and CO2 atmospheric levels: 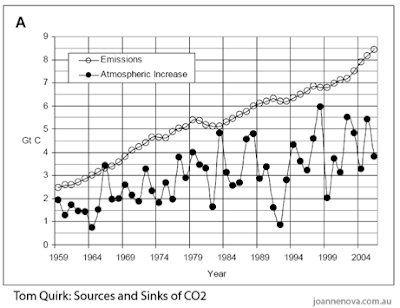 Both graphs show a lack of correlation between ACO2 and CO2 which is consistent with what Knoor found: 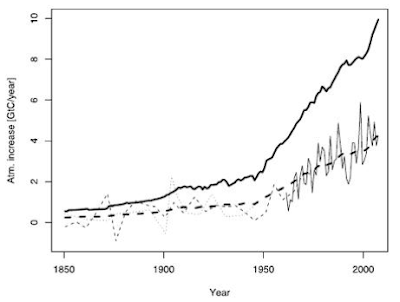 As is plain from all three graphs, there is little correlation between ACO2 emissions and the atmospheric concentration of CO2 except that both are generally going up. If humans are not responsible for all and possibly very little of the increase in CO2, it would not matter if CO2 was causing temperature to rise because humans are not responsible for the increase in CO2. But in addition it is also plain that CO2 does not drive temperature but rather it is the other way round.