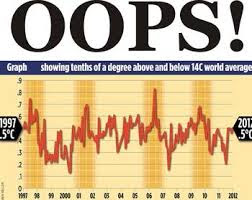 Don Aitken, in answering a remark that "unless the sceptical minority came up with their own theory about how and why climate changes they would never be taken seriously."

My answer to that is that we sceptics are not asking for anything. The alarmists want to severely contract the West's economies with their calls to kill man's emissions of carbon dioxide.

.....one doesn’t need one’s own theory in order to see weaknesses in another. If they are there, you can point out weaknesses in any theory — you don’t have to argue from the  position of a rival theory.

Or, perhaps, a sceptic can start from the position of the null hypothesis: there is nothing to explain.


The Editor of the site, in reviewing new survey findings about the supposed ‘consensus’ of climate scientists, said that there were two debates, one about science the other about policy, which were often conflated, but that until sceptics developed their own theory they would always be in a minority.

For purveyors of climate alarm, emotional displays of intolerance are increasingly crowding out reasoned argument. But remember the adage, “hate hurts the hater more than the hated.”

It struck home to this blogger because I have recently been subject to displays of intolerance with a reverse claim of creating "hate-posts against some of the famous people that (sic) promote global warming info."

This was on a FaceBook group called hypocritically "Climate Change - an open discussion." The moderator then removed me from the group but then in a cowardly fashion,  continued to smear my name although, as I was removed, had no right of reply.

He said that he had removed me from the group "for portraying serious people promoting climate change in very bad ways..." and then: "I also removed his post where he said he linked them photoshopping themselves at Skeptical Science in a certain way....." The clowns at the paid disinformation site UNSkeptical UNScience (SS) HAD photoshopped themselves in Nazi uniforms as well photoshopping " some of the famous people who promote global warming info" as gladiators:

Hmmmm......when will the CC - an open discussion convenor condemn SS for their "hate-post" against Watts, Monckton and Delingpole?