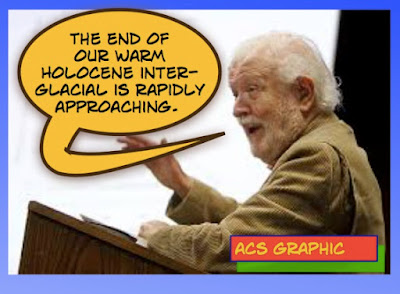 Fred Singer, writing for American Thinker has a piece under the banner:


I want to change public concern from Global (GW) to Global Cooling (GC).  Presented here are three arguments in favor of such a drastic shift -- which involves also a drastic shift in current policies, such as mitigation of the greenhouse (GH) gas carbon dioxide.

Now, as there is NO empirical evidence that (man's emissions of) carbon dioxide are causing GW, the first leg is already established.

My main argument relies on the fact, backed by historical evidence, that cooling, even on a regional or local scale, is much more damaging than warming.

Again, Fred is just pointing out an obvious reality. In May this year, The esteemed medical Journal - The Lancet -published:

Cold weather kills 20 times as many people as hot weather, according to an international study analyzing over 74 million deaths in 384 locations across 13 countries. The findings also reveal that deaths due to moderately hot or cold weather substantially exceed those resulting from extreme heat waves or cold spells. (bold added)