Global Warming is not the most serious issue facing the world today. 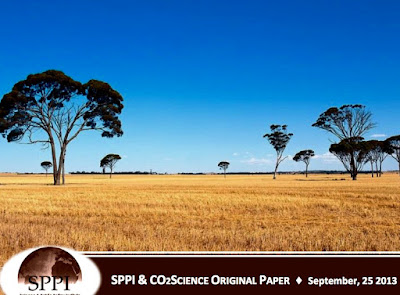 Climate sensitivity (CS) is defined by the shrill (eg the alarmists, the warm-mongers) as the temperature increase to a doubling of CO2 (2XCO2) from its level of 280 parts per million (PPM) in about 1890 before Anthropogenic Global Warming (AGW) allegedly began.

The IPCC reckons there are 2 parts to CS


But who knows when that will be and what it will be? The IPCC has been reducing it for years as Lord Monckton shows on page 5 og the report - cover image above.

And David Stockwell (see below) has done a neat article showing the reduction in both TCS and ECS over the years. The climate sensitivity farrago is discussed here, noting figure 8. 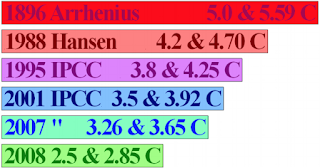 The histogram shows official projections of the warming to be expected in response to a doubling of atmospheric CO2 concentration, and at the end of the 21st century. The first projection, by Arrhenius, was in 1896. Each successive projection has been smaller than the last. Between 1995 and 2007 the IPCC reduced the official projection three times in succession. Then, in 2008, James Hansen of the Goddard Institute for Space Studies, probably unaware that the IPCC’s central estimate of the climate sensitivity parameter lambda was close to 1, issued a statement to the effect that his central estimate of lambda was 0.75, requiring a further reduction of the official climate sensitivity estimate by onequarter, to just 2.5 Celsius degrees for a CO2 doubling, and less than 3 C° by 2100.

The climate sensitivity due to CO2 is expressed as the temperature change in °C associated with a doubling of the concentration of carbon dioxide in Earth’s atmosphere. The equilibrium climate sensitivity (ECS) refers to the equilibrium change in global mean near-surface air temperature that would result from a sustained doubling of the atmospheric carbon dioxide concentration.  The transient climate response (TCR) is defined as the average temperature response over a twenty-year period centered at CO2 doubling in a transient simulation with CO2 increasing at 1% per year. The transient response is lower than the equilibrium sensitivity, due to the “inertia” of ocean heat uptake.

Scientists made numerous estimates of climate sensitivity over the last few decades and have yet to determine the correct value.  The figure shows the change in published climate sensitivity measurements over the past 15 years (from here).  The ECS and TCR estimates have both declined in the last 15 years, with the ECS declining from 6C to less than 2C.  While one cannot extrapolate from past results, it is likely that the true figure is below 2C, and may continue to decline.  Based on this historic pattern we should reject the studies that falsely exaggerated the climate sensitivity in the past and remember that global warming is not the most serious issue facing the world today.


Has Man-made global warming been disproved?

by Anthony Cox and Joanne Nova.