Stealing from the Biosphere.

Another Issue of "Carbon Sense” prepared for The Carbon Sense Coalition by Viv Forbes and volunteer helpers.


Green Energy Steals from the Biosphere

Earth has only three significant sources of energy.

First is geothermal energy from Earth’s molten core and decaying radioactive minerals in Earth’s crust. This energy moves continents, powers volcanoes and its heat migrates towards the crust, warming the lithosphere and the deep oceans. It can be harvested successfully in favourable locations, and radioactive minerals can be extracted to provide large amounts of reliable heat for power generation.

Second is energy stored in combustible hydrocarbon minerals such as coal, oil, gas, tar sands and oil shale. These all store solar and geothermal energy collected eons ago and they are the primary energy sources supporting the modern world and its large and growing populations.

Third are radiation and gravitational energies from the Sun and Moon which are captured by the biosphere as heat, winds, tides, rain, rivers and in biomass such as forests, crops and animals. These are the natural “Green” energies that support all processes of life and still support a peasant existence for some peoples.

Green zealots believe that we can and should run modern societies exclusively on “Green” energies, and they have embarked on a war on hydrocarbons. They need to be told that their green energy favourites are just stealing from the biosphere – they are not as green as they claim.

The most obvious example is the ethanol industry which takes food crops like corn, sugar and palm oil and uses heaps of water and a lot of hydrocarbon energy to convert them to ethanol alcohol which will burn in internal combustion engines, but has less energy density than petrol.

See: The Water and Corn costs to produce Ethanol:
http://gazette.Com/the-water-and-corn-cost-for-a-gallon-of-ethanol/article/1506579

This process is replacing natural grasslands and forests with artificial monocultures.

The latest stupid ethanol suggestion is to power Obama’s “wanna-be-green” US Pacific Fleet using Queensland food crops. Feeding ethanol to the engines of the US Navy would consume far more food than was used feeding hay and grain to the thousands of horses used to move our artillery and Light Horse Brigades in the Great War. Sailors in the British Navy got much of their energy from Jamaican Rum, but the American navy will not run on Queensland ethanol whiskey.

Biomass is a fancy name for plant material and vegetable trash which, if maintained in/on the soil, will provide the fertility for the next crop. Burning it reduces the humus that maintains fertile soil. The ultimate biomass stupidity is to harvest American forests, pelletise them, dry them and ship them across the Atlantic (all using hydrocarbon fuels) to burn in a UK power station. Burning biomass produces the same emission gases as coal.

Most plants will not grow without energy from the sun. Solar arrays steal energy directly from the biosphere. Some incoming solar energy is reflected to space by the panels, some is converted to waste heat on the panels, and some is converted to electricity - much of which ends up as waste heat. Solar radiation that could have given energy to growing plants is largely returned to the atmosphere as waste heat and much is then lost to space.

Some solar farms are built over land that is already a desert - the rest create their own deserts in their shadow. Because solar energy is very dilute, very large areas of land must be shaded and sterilised by the panels in order to collect significant energy.

Solar radiation also evaporates water from the oceans and provides the energy for rain, winds and storms. Much of this moisture falls as useful rain when the winds penetrate land masses. Wind turbines create artificial obstacles to the wind, reducing its velocity and thus tending to create more rain near the coast and rain shadows behind the turbine walls. And they chop up many birds and bats. Again, green energy harms the biosphere.

Hydro power is one of the few green energy sources that is “grid ready” and can supply economical reliable energy. So, naturally, many greens are opposed to it. However, in most places there is competition for fresh water for domestic uses, irrigation, industry and environmental flow. Hydro power is just one more competitor for this valuable green resource.

So… Green energy is not so green after all. It reduces the supply of food, water and energy available to all life on earth, and it often consumes large amounts of hydrocarbon energy for its manufacture, construction, maintenance and backup.

Green advocates are enemies of the poor. They want to burn their food, waste their water and deny them access to cheap reliable energy.

Hydrocarbon fuels are the true green energy sources. They disturb less land per unit of energy produced, they do not murder wildlife, and their combustion produces new supplies of water and carbon dioxide for the atmosphere. More carbon dioxide and water in the atmosphere enables plants to grow faster, bigger and more able to cope with heat or drought.

It was coal, and later oil, which created and still largely supports the populations, prosperity and industry of developed nations. With a backdrop of freedom under the law, they can do the same for the whole world.

Those professing concern for the poor need to realise that Green Energy steals from the biosphere and that hydrocarbons are the real friends of the poor.

Finally, those who have swallowed the carbon dioxide scare should be told that nuclear energy is the most reliable and least damaging “low carbon” option.

Promote the Wind and Reap the Whirlwind

June 15th has been declared by wind energy rent-takers as “Global Wind Day”.

This is just another orchestrated media event designed to distract taxpayers, electricity consumers and wind turbine victims from the follies of wind energy.

The only people celebrating will be turbine owners getting subsidies, propped-up prices and guaranteed markets; lucky landowners getting rich on compensation; and green zealots promoting a UN Agenda.

But neighbours of turbines driven mad by the noise of the thumping blades are not celebrating; neither are the birds and bats being sliced by the spinning sickles; nor nearby property owners who see their property values slashed; nor true environmentalists concerned to see the destruction and uglification of their landscapes and hilltops with a spider-web of turbines, transmission lines and access roads; nor electricity consumers facing expensive and increasingly unreliable power supplies.

Future generations will look back in wonder at a whole generation of westerners whose misdirected religious green zeal wasted billions of dollars to create industrial and environmental destruction, while insisting (without evidence) that it would create a cooler climate, and that everyone wants a cooler climate.

Those who sow the wind will reap the whirl-wind.

A Few Cracks have opened up in the Road to Paris.

The globalist greens are all eager to celebrate a big victory in Paris in December. They hope to lay firm foundations for an unelected world government funded by world carbon taxes and levies. We must stop them.

But a few cracks have opened up in the road to Paris:
[

1.    First the green socialists lost heavily in the recent UK elections. Since then the Conservatives have announced the end of subsidies for on-shore wind. The wind power promoters know that is the beginning of the end for them. Soon mandated market shares or prices will also be questioned, and the once-powerful Department of Energy and Climate Change may soon be broken up or scrapped. UK also faces higher bills to keep the lights on next winter. See:

2.   The Paris globalists have woken up to the fact that the US Congress will disallow any legally binding international agreement. So they are seeking ways to sneak past this road block.
See:
http://www.theguardian.com/world/2015/jun/01/un-climate-talks-deal-us-congress

And back in March,  92% of Swiss voters rejected a proposed carbon tax.

3.   The Australian Conservative Government has directed that the government-funded Clean Energy Finance Corporation give no more finance to wind power or to roof top and small scale solar installations.
See:
http://www.smh.com.au/federal-politics/political-news/government-pulls-the-plug-on-household-solar-20150712-gian0u.html

4.   The Greek-German financial war should teach all parties the Iron Law of Debt:

“All debts are paid, ether by the borrower, or the lender.”

When some disinterested party gets to analyse how the Greeks got into this mess, they will find that throwing buckets of money and political favours to green energy promoters has played a significant part in creating government bankruptcy and personal poverty in Greece. Italy, Spain and Portugal are on this same road.

5.   Finally, the German government glimpsed energy reality when it was forced to drop its proposed carbon tax on coal-fired power stations or face their closure. It was also forced to guarantee standby payments to keep backup power ready for when wind/solar fails during some still, dark, cold, winter night. The whole power industry has been crippled by green subsidies and mandates and is now a mendicant industry dependent on government whim.

We must make sure that NOTHING is achieved in Paris. Keep the pressure on your local federal MP and Senators of all parties. Tell them:

“No binding Agreement in Paris
and a ‘Get Out’ clause on anything agreed”.

Back in the days when Rome and Carthage were deadly enemies, it was obligatory in the Roman Senate that every speech should end with the words:

“And Carthage must be destroyed”.

We must show similar dedication and resolve, repeating every day until the Paris Party in December:

“And NOTHING must be signed in Paris”.

Disclosure:
Viv Forbes has spent many years working in the exploration, coal, oil, gas and cattle industries of Australia as well as in government service. He is a non-executive director and minor shareholder of a small Australian coal exploration company, but he and his wife spend most of their time and energy raising meat sheep and beef cattle on natural grasslands. He was the founder of the Carbon Sense Coalition, which receives no funding, encouragement or direction from Big Government, Big Coal, Big Oil or Big Green.

In the 70s, Global Temps were going down and an Ice Age was predicted 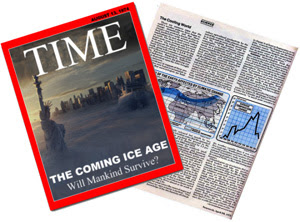 UNSkeptical UNScience (SS) and their amazingly incorrect list of "myths."  Here we debunk No 11.

SS adds in their link:

In the thirty years leading up to the 1970s, available temperature recordings suggested that there was a cooling trend.

Here are the data from mid 50s to the mid 70s from GISS, NCDC and HadCRUT4. All three show a definite cooling. (Graphs from Prof Humlum's Climate4You) 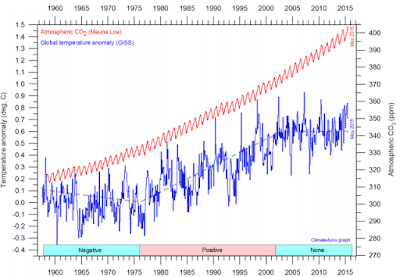 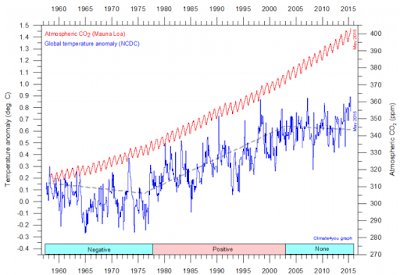 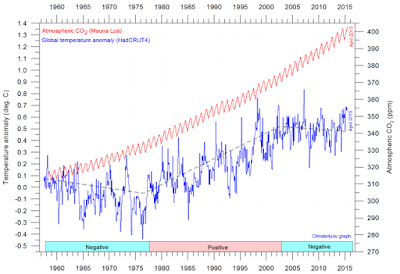 Diagrams showing HadCRUT4, GISS, and NCDC monthly global surface air temperature estimates (blue) and the monthly atmospheric CO2 content (red) according to the Mauna Loa Observatory, Hawaii. The Mauna Loa data series begins in March 1958, and 1958 was therefore chosen as starting year for the diagrams. Reconstructions of past atmospheric CO2 concentrations (before 1958) are not incorporated in this diagram, as such past CO2 values are derived by other means (ice cores, stomata, or older measurements using different methodology), and therefore are not directly comparable with direct atmospheric measurements. The dotted grey line indicates the approximate linear temperature trend, and the boxes in the lower part of the diagram indicate the relation between atmospheric CO2 and global surface air temperature, negative or positive


Ice age predicted in the 70s. Sure was, and everyone, scientists, politicians and the media were predicting it.

Every major climate organisation endorsed the ice age scare, including NCAR, CRU, NAS, NASA – as did the CIA. 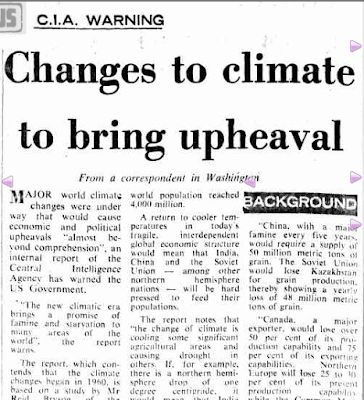