The Doomsayers are the Real Dodos.

Anthony writes that it is Not happening linking to internationally recognised expert David Stockwell's piece in Quadrant:

A Theory Ready for Extinction 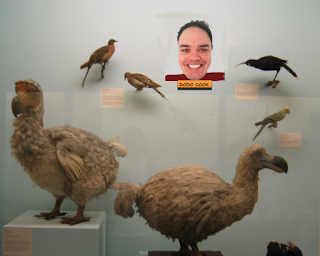 The lesson of the ‘climategate’ emails, the ‘hockeystick wars’, and the recent ‘pause’ is that the IPCC reports have a tendency to be self-serving. Blind faith in the IPCC projections shows subjectivity, if not outright naïveté.  To the degree that studies base their estimates on a rate of warming far greater than observed, published extinction estimates from climate change should also be down graded.


Don't worry too much over those warmist predictions that millions of species will soon be lost to climate change. Judging by their methods it is the doomsayers who are the real dodos.


The IPPC didn’t think mass extinctions were happening in a draft paper. And even when the concession in the draft paper was cleaned up (peer pressure) the IPCC contradicts itself about extinctions as renowned ecologist Professor Botkin notes.

Nature is the expert on extinctions with more than 99% of all animals which have ever existed now extinct.

It hasn’t warmed since 1998.   Longer according to McKitrick’s peer reviewed paper.


The IPCC has drawn attention to an apparent leveling-off of globally-averaged temperatures over the past 15 years or so. Measuring the duration of the hiatus has implications for determining if the underlying trend has changed, and for evaluating climate models. Here I propose a method for estimating the duration of the hiatus that is robust to heteroskedasticity and autocorrelation in the temperature series and to cherrypicking of endpoints. For the specific case of global warming I also add the requirement of spatial consistency between hemispheres. The method makes use of a HAC-robust trend variance estimator which is valid under autocorrelation of unknown form as long as the underlying series is trend stationary, which is the case for the data used herein.

Application of the method shows that there is now a trendless interval of 19 years duration at the end of the HadCRUT4 surface temperature series, and of 16-26 years in the lower troposphere. Use of a simple AR1 trend model suggests a shorter hiatus of 14- 20 years but is likely unreliable.


Again, the IPCC agrees there has been a pause since 1998.


Box 9.2: Climate Models and the Hiatus in Global-Mean Surface Warming of the Past 15 Years

My original intention for this thread was to go through and try to map the IPCC’s logical argument.  I quickly got dizzy owing to seemingly unwarranted assumptions and incomplete information (such as: did the climate models use the correct external forcing for the first decade of the 21st century, or not?)

So does the MET.