Another rebuttal of Sketical Science and their false science about Global Warming. Their myth number 92: 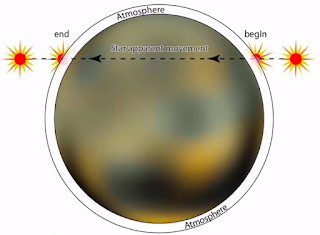 The claim that "The ‘evidence’ for climate change consists of just two observations made in 1988 and 2002" is false.

1000frolly writes:
As the New Horizons spacecraft approaches Pluto, work by Elliott et al has revealed that a climate change is happening on Pluto.

They have no explanation for this.
Pluto passed its closest approach to the sun years ago; yet, incredibly between 1988 and 2002, Pluto's atmospheric pressure more than doubled!
What could have caused this? Al Gore and 97% of climate scientists says it is our CO2; what do you think?

ABSTRACT The 2006 June 12 occultation of the star P384.2 (2UCAC 26039859) by Pluto was observed from five sites in southeastern Australia with high-speed imaging photometers that produced time-series CCD images. Light curves were constructed from the image time series and fit by least-squares methods with model light curves. A new modeling procedure is presented that allows a simultaneous fit of the atmospheric parameters for Pluto and the astrometric parameters for the occultation to all of the light curves. Under the assumption of a clear atmosphere and using this modeling procedure to establish the upper atmosphere boundary condition, immersion and emersion temperature profiles were derived by inversion of the Siding Spring light curve, which had our best signal-to-noise ratio. Above 1230 km radius, atmospheric temperatures are 100 K and decrease slightly with altitude—the same as observed in 1988 and 2002. Below 1210 km, the temperature abruptly decreases with altitude (gradients 2.2 K km1 ), which would reach the expected N2 surface-ice temperature of 40 K in the 1158Y1184 km radius range. This structure is similar to that observed in 2002, but a much stronger thermal gradient (or stronger extinction) is implied by the 1988 light curve (which shows a ‘‘kink’’ or ‘‘knee’’ at 1210 km). The temperature profiles derived from inversion of the present data show good agreement with a physical model for Pluto’s atmosphere selected from those presented by Strobel et al. (1996). Constraints derived from the temperature profiles (and considering the possibility of a deep troposphere) yield a value of 1152 32 km for Pluto’s surface radius. This value is compared with surface-radius values derived from the series of mutual occultations and eclipses that occurred in 1985Y1989, and the limitations of both types of measurements for determining Pluto’s surface radius are discussed. The radius of Pluto’s atmospheric shadow at the half-intensity point is 1207:9 8:5 km, the same as obtained in 2002 within measurement error. Values of the shadow radius cast by Pluto’s atmosphere in 1988, 2002, and 2006 favor frost migration models in which Pluto’s surface has low thermal inertia. Those models imply a substantial atmosphere whenNew Horizons flies by Pluto in 2015. Comparison of the shape of the stellar occultation light curves in 1988, 2002, and 2006 suggests that atmospheric extinction, which was strong in 1988 (15 months before perihelion), has been dissipating. 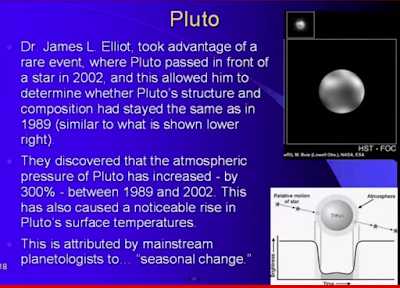