The Pope and the Poor. 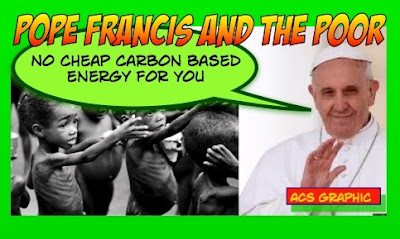 The World awaits as Pope Francis and his advisers draw up their official Vatican statement on climate change and the environment – expected out this week.


The 192-page document is Pope Francis’ first major teaching letter on climate change and its effects on the planet’s poor. Hailed by some as the “pope of the poor,” Francis’ linkage of environmental and economic issues puts the Vatican out front on a closely watched topic.

Pope Francis makes an urgent call for protection of the planet and repeats his view that global warming is mostly man-made in his keenly awaited encyclical, according to a draft published by an Italian magazine on Monday.

As sources said before Monday's leak, the encyclical addresses the impact of climate change on the poorest nations and notes a broad scientific consensus that global warming is mostly caused by fossil fuels.

The Impact on the Poor?


The Pope is reportedly worried about how climate change might impact the poor, and he is quite right to be concerned. But it is the environmental proposals currently being championed as solutions, however, that are the real threat. The most frequently cited policies for allegedly “dealing with climate change” – like raising prices on fossil fuels and taxing carbon dioxide emissions – would actually cause harm to energy-starved and impoverished nations around the world.

The Catholic Church has a history of resolving complex risk situations. For example, to ensure that saints were properly selected, the Church ensured that both sides of the case were heard.

The Advocatus Dei made the case favouring that decision; the Advocatus Diablo – “Devil’s Advocate” – made the opposing case. One hopes that in addressing the morality of energy restrictions, both sides will be heard. The Vatican has heard the case for conventional environmental policies, having recently hosted a conference on this topic. Have they heard the opposing view?

To this humble blogger's simple mind, surely the church followers should believe that their God is in control of the weather/climate. A Google search of their Bible finds many references, eg:


'While the earth remains, seedtime and harvest, cold and heat, summer and winter, day and night shall not cease' (Gen 8.22).

"When He imparted weight to the wind And meted out the waters by measure, When He set a limit for the rain And a course for the thunderbolt, Then He saw it and declared it; He established it and also searched it out. (Job 28:25-27)


Then I will give you your rains in their season, and the land shall yield its increase, and the trees of the field shall yield their fruit. (Leviticus 26:4)

Many more references on "God Bible Climate Weather" from Dr Google, however, if they believe in their God, why do they go outside their reference book to believe the pseudo-science of the Shrill?

And, if the Pope is interested in the poor nations, they will be severely affected by the AGW hoax.

As Fred Smith on Forbes continues:


The world’s poorest people already spend a disproportionate amount of their income on energy. Increasing prices would block the shift in poorer nations from “biomass” fuels like dried animal dung to much healthier alternatives like propane and natural gas.

Increasing energy costs will slow the process of replacing backbreaking human labor with mechanical devices, as occurred over the past century in now-wealthy Western countries. The next stage of industrialization and prosperity will be blocked, as the factories and processes that the United States and Europe used to grow their economies in the 19th and 20th centuries will no longer be affordable—or possibly even allowed under international law.

The impact on individuals and families in poor countries will also be enormous. When a key economic input like fossil fuel energy artificially increases in price, virtually everything becomes more expensive. For the 1.2 billion people living on less than $1 a day, making everything they need to survive even marginally more expensive would be catastrophic.

None of this is to say that potential threats from future climate change should simply be ignored. If the world’s leaders—from heads of state to spiritual leaders like Pope Francis—want to help make the world a safer place, they should champion policies that improve society’s ability to cope with disasters, environmental and otherwise, and avoid those that hamper economic growth and innovation.

A wealthier world is a healthier world, and it’s the people at the bottom of the economic ladder who will benefit most from rising global prosperity. People of good faith have innumerable ways to help our fellow humans flourish and protect themselves from harm. Forcing them into perpetual energy poverty is not one of them. I hope Pope Francis will agree. 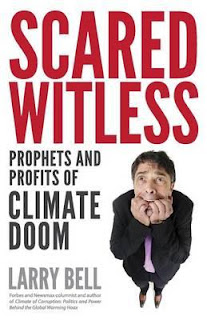 
Forbes and Newsmax columnist Larry Bell exposes powerful players and agendas behind political-science premised climate alarmism. Written for the layperson by an internationally distinguished expert on space and other extreme environments, he deftly deflates overheated myths and deliberate distortions with cool-headed facts, perceptive analysis and humor.


About 438 million years ago, atmospheric CO2 dropped from 4,500ppm to 3,000 ppm, yet according to fossil records, world temperatures shot rapidly back up to an average 72ºF (22ºC). So, regardless whether CO2 levels were 7,000ppm of 3,000ppm temperatures rose and fell independently.

...virtually all climate models have predicted that if  greenhouse gases caused warming, there is supposed to be a telltale "hot spot" in the atmosphere about 10 Km above the tropics.Weather balloons (radiosondes) and satellites have scanned these regions for years and there is no such pattern

[The IPCC] really has little to do with objectiver science. It is much more about political spin aimed at highlighting pre-conceived attention-grabbing hyperbole for release to the media in Summary for Policymakes reports. Non-scientific government appointees actually control the entire report to make sure it stays exactly with the politically-controlled message they can all agree with.

A Paper published in Earth-Science Reviews shows that both the Roman Warm Period (RWP) and the Medieval Warm Period (MWP) warmed the Sea Surface temperature (SST) in the northern South China Seas. The shrill Alarmists maintain that the MWP was purely a Northern European Phenomenon, eg UNSkeptikal UNScience: (link)


While the Medieval Warm Period saw unusually warm temperatures in some regions, globally the planet was cooler than current conditions. 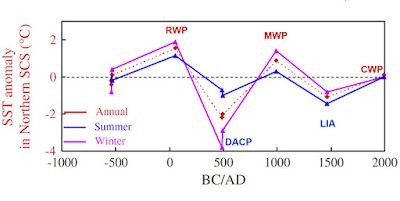 
High-resolution late Holocene climate records that can resolve seasonality are essential for confirming past climatic dynamics, understanding the late 20th century global warming and predicting future climate. Here a new composite record of the sea surface temperature, SST, variation in the northern South China Sea (SCS) during
the late Holocene is constructed by combining seven seasonally-resolved coral and Tridacna gigas Sr/Ca-based SST time-windows with the instrumental SST record from modern interval between 1990 and 2000. This composite multi-proxy marine record, together with the reconstructions from mainland China and tropical Western Pacific, indicates that the late Holocene warm periods, the Roman Warm Period (RWP) and Medieval Warm Period (MWP), were prominently imprinted and documented in the climatic and environmental history of the East Asia–Western Pacific region. Meanwhile, substantial and significant SST seasonality variations during the late Holocene were observed in the composite record. The observed increase in seasonality (or amplitude of seasonal cycles) during the cold periods around our study area was probably caused by the different amplitudes between winter versus summer SST variations in northern SCS, with much larger SST variation during winters than during summers for the late Holocene. In addition, the distinctive warm, cold and neutral climatic episodes identified in our northern SCS composite SST record correspond well with other paleo reconstructions from mainland China and especially well with the Northern Hemisphere-wide composites by Moberg et al. (2005) and Ljungqvist (2010). The overall agreement however also calls for more information and insights on how seasonal temperatures and their ranges vary on decadal–centennial timescales.


Introducing their work, Yan et al. (2015) note several high-resolution climate reconstructions of the late Holocene provide an opportunity to place current global warming in a long-term context; and they thus proceed to describe the results of their contribution to this important effort, which was to combine seven high-resolution, seasonally-resolved, coral and Tridacna gigas (the largest bivalve species in the global ocean) proxy-SST records together with the instrumental SST record from the 1990 to 2000 interval to provide a 2500-year history of the climatic variations in the northern SCS over the late Holocene.