Much news around that confirms the AGW scare is just that: an empty scare. Some of the stories: 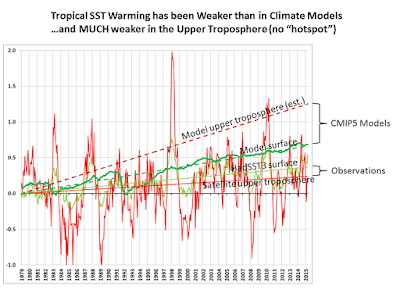 One of the most vivid predictions of global warming theory is a “hotspot” in the tropical upper troposphere, where increased tropical convection responding to warming sea surface temperatures (SSTs) is supposed to cause enhanced warming in the upper troposphere.

The trouble is that radiosonde (weather ballons) and satellites have failed to show evidence of a hotspot forming in recent decades. Instead, upper tropospheric warming approximately the same as surface warming has been observed.

A major study abstract published in the Lancet analyzed 74 million deaths from 384 locations in 13 countries from 1985 to 2012 and found that moderately cold weather kills twenty times more people than hot weather.

From a story in London’s Guardian:

“It’s often assumed that extreme weather causes the majority of deaths, with most previous research focusing on the effects of extreme heatwaves,” says lead author Dr. Antonio Gasparrini from the London School of Hygiene and Tropical Medicine.  “Our findings, from an analysis of the largest dataset of temperature-related deaths ever collected, show that the majority of these deaths actually happen on moderately hot and cold days, with most deaths caused by moderately cold temperatures.”


From WryHeat by Jonathan DuHamel 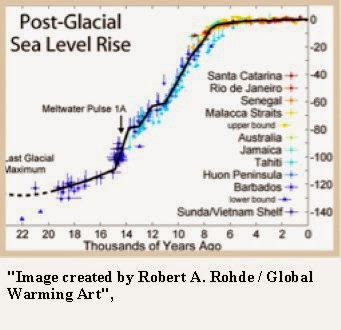 Climate alarmists put forth scary scenarios saying that carbon dioxide induced global warming is causing unprecedented and accelerating sea level rise which will drown our coastal cities and wipe out South Pacific Islands, but observational evidence shows there is no reason for alarm.

The Australian government has been monitoring sea level on Pacific islands with modern instruments since 1992. In the case of Tuvalu, they state, “If the depression of the 1998 cyclone is ignored, there was no change is sea level at Tuvalu between 1994 and 2009: 14 years. (See report of studies by Vincent Gray here.)

Finally, new research by Kench et al. (2015) finds that these same South Pacific islands, rather than sinking beneath the waves, have in fact been growing.


Coral islands defy sea-level rise over the past century: Records from a central Pacific atoll

From The Daily Caller:

Global temperature change observed over the last hundred years or so is well within the natural variability of the last 8,000 years, according to a new paper by a former Intergovernmental Panel On Climate Change (IPCC) lead author.

What Lloyd found was that the standard deviation of the temperature over the last 8,000 years was about 0.98 degrees Celsius– higher than the 0.85 degrees climate scientists say the world has warmed over the last century.