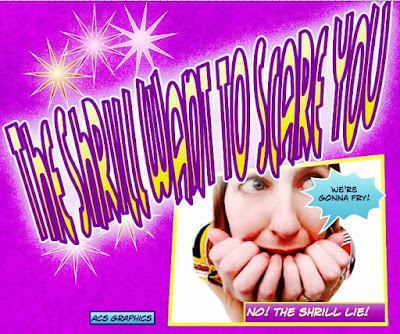 As COP21 in Paris approaches the shrill alarmists are losing the argument.

As COP21 approaches, the Shrill are getting shriller.

But wait! Aren't we all gonna fry? Wasn't last year hyped up as the hottest year ever?

No, this has been debunked so many times, Marc Morano has a whole page of debunking links on Climate Depot -

So, why are the Shrill Alarmists getting shriller? Shouldn't they be cheering because the planet is not facing the disaster that they prophesied? Or are they all, like James Hansen, working to a political agenda?

James Hansen, while he was working for NASA:GISS, was politically active:


Although Hansen has been a practicing scientist throughout his working life, he is also well known as a prominent environmental activist. He unashamedly promotes alarmism about the trivial levels of atmospheric carbon dioxide, relating these to the prospects of environmental disaster, saying:“The trains carrying coal to power plants are death trains. Coal fired power plants are factories of death.” (link)

It is a political Agenda, not a environmental agenda, as UNFCCC chief Christiana Figueres admitted in a  Press Release in February (Link)


"This is  probably the most difficult task we have ever given ourselves, which is to intentionally transform the economic development model, for the first time in human history.

This is the first time in the history of mankind that we are setting ourselves the task of intentionally, within a defined period of time to change the economic development model that has been reigning for at least 150 years, since the industrial revolution. That will not happen overnight and it will not happen at a single conference on climate change, be it COP 15, 21, 40 - you choose the number. It just does not occur like that. It is a process, because of the depth of the transformation."

The Shrill keep talking up the "scientific consensus" - an appeal to the majority.


In Philosophy 101, we learn about Argumentum Ad Populum (popular appeal or appeal to the majority):

The fallacy of attempting to win popular assent to a conclusion by arousing the feeling and enthusiasms of the multitude.

There are several variations of this fallacy, but we will emphasize two forms.

Was Michael Chrichton a scientist?


“I want to pause here and talk about this notion of consensus, and the rise of what has been called consensus science. I regard consensus science as an extremely pernicious development that ought to be stopped cold in its tracks. Historically, the claim of consensus has been the first refuge of scoundrels; it is a way to avoid debate by claiming that the matter is already settled. Whenever you hear the consensus of scientists agrees on something or other, reach for your wallet, because you're being had.

Let's be clear: the work of science has nothing whatever to do with consensus. Consensus is the business of politics. Science, on the contrary, requires only one investigator who happens to be right, which means that he or she has results that are verifiable by reference to the real world. In science consensus is irrelevant. What is relevant is reproducible results. The greatest scientists in history are great precisely because they broke with the consensus.

We mentioned James Hansen above. James has a very similar academic career to Dr Gordon Fulks. However, James entwined his science with politics. Gordon and James agree on many points. Hansen's senate address in 1988 was on the historically hottest day and,on purpose, they turned the air-con off. Hansen has been arrested at protests during his career with NASA:GISS.

On the other hand, astrophysicist Dr Gordon J Fulks, with his similar background  to James Hansen and others promoting the CAGW hoax, has never accepted ANY money to promote or oppose any theory because that is unethical, and he is considerably more experienced than most who have.

Freeman Dyson, an English-born theoretical physicist and mathematician, wrote in his book Dreams of Earth and Sky


In the history of science it has often happened that the majority was wrong and refused to listen to a minority that later turned out to be right.


Galileo Galilei “In questions of science, the authority of a thousand is not worth the humble reasoning of a single individual.”

The "97% consensus myth" is one of the most debunked myths of the shrill. This blog has written and recorded many refutations of the myth, including inter alia:-

Many others have exposed the flawed studies published to prop up the Consensus Myth and yet the Alarmists, the shrill keep pushing this flawed unscientific myth.

Will they ever revert to honesty?