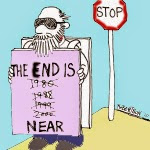 This year the Shrill Alarmists made a frightful forecast:


The world should take note that the climate summit in Paris later this year (COP21) may be the last effective opportunity to negotiate arrangements to keep human-induced warming below 2ºC and aim to stay well below 2ºC for safety......

Political leaders of all UN member states have a special responsibility to agree at COP21  to a bold climate agreement that confines global warming to a limit safe for humanity. 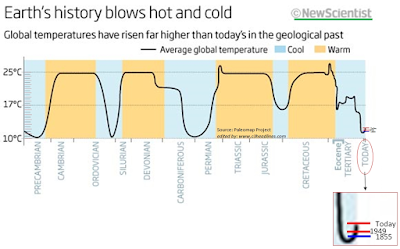 Funny. The planet has survived greater temperatures than this. See graph from New Scientist - above.

Obviously the Alarmists like recycling. Here's a report from the San Jose Mercury News (CA) - June 30, 1989


A senior environmental official at the United Nations, Noel Brown, says entire nations could be wiped off the face of the earth by rising sea levels if global warming is not reversed by the year 2000. Coastal flooding and crop failures would create an exodus of "eco-refugees," threatening political chaos, said Brown, director of the New York office of the U.N. Environment Program. He said governments have a 10-year window of opportunity to solve the greenhouse effect

James Hansen, in 2007 "we have already reached a “tipping point"


The top US climate scientist Dr James Hansen (Goddard Space Research Center, NASA) declares that we have already reached a “tipping point such that Arctic summer ice may be completely gone in several years i.e. the CURRENT atmospheric CO2 concentration of 385 ppm means catastrophic ecosystem change ALREADY and that accordingly we must have NEGATIVE CO2 emissions to bring it back to a safe and sustainable 300-350 ppm


“If there’s no action before 2012, that’s too late. What we do in the next two to three years will determine our future. This is the defining moment.”

So, the tipping point moved on twelve years to 2012.


the UK faces a "catastrophe" of floods, droughts and killer heatwaves if world leaders fail to agree a deal on climate change.

Gordon Brown said negotiators had 50 days to save the world from global warming and break the "impasse".

He told the Major Economies Forum in London, which brings together 17 of the world's biggest greenhouse gas-emitting countries, there was "no plan B".