Lomborg and the Alarmists. 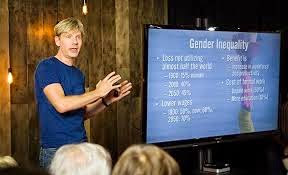 The disgraceful treatment of Bjørn Lomborg by the University of Western Australia (UWA) once again reveals what sort of people alarmists are. They are tribalised, censorious, intolerant and a threat to this nation’s economy and future prosperity. The vast amounts of money wasted on AGW and the RET will continue to drain public resources. The RET is simply money down the drain. Every dollar spent on the wretched renewables is just a straight impost on the cost of power. No fossil energy source has ever closed down because wind or solar could supply the same reliable power.

Lomborg is not the only genuine scientist who has been attacked by alarmists. Bob Carter, Ian Plimer, Lennart Bengtsson, Judith Curry, Lindzen, Spencer, Christy, Stewart Franks by Karoly, poor Willy Soon, in fact anyone who disagrees with the alarmists will endure personal attacks and censorship.

Lomborg is a genuine scientist. His book, The Skeptical Environmentalist is one of the great studies of Earth. Lomborg thinks the world is warming but that this will be great, a benefit. In his follow up book, Cool It, Lomborg shows how warming would benefit the world and if there is warming, rather than destroy civilisation as the alarmists want to do, it would be far better to adapt and enjoy the benefits of warming which outweigh the disadvantages by $1trillion dollars ( figure 11).

And this is why alarmists hate Lomborg when in reality any reasonable person should be falling over themselves to be a student where he teaches. Lomborg is a believer in AGW but he thinks it would be good.

Belief in AGW is Orwellian. The alarmists use the same methods as communists did and still do to punish those who do not follow the ideological position. Lomborg is an apostate and is treated with almost the same hostility as apostates are in Islam.

The government should not only withdraw its $4 million, an absolutely puny amount compared to how much alarmist ‘scientists’ get from the public purse, but reduce UWA’s budget by another $4 million as a balance to the anti-education and anti-science position they have taken. And then they should give Lomborg $8 million to do his research with.

That won’t happen of course; the coalition have not wanted to take on the Universities. So they remain, along with the ABC, both publicly funded, as the main proponents of the belief in AGW.
Posted by Geoff on May 09, 2015 2 comments: