This blog has written before about the paid disinformation site [UNSkeptical UNScience] run by UNSkeptical cartoonist John Cook. For example, under the heading:

John Cook will receive lots of money for climate propaganda This guy has no clue about the climate science or atmospheric physics but he has gained some notoriety for his mass production of talking points meant to spread the climate panic and produce doubts about well-established scientific insights that show that there is no reason to be worried about climate change.

John Cook might be skeptical about skeptics, but when it comes to government funded committee reports, not so much.
The author of “skeptical science” has finally decided to try to point out things he thinks are flaws in The Skeptics Handbook. Instead, he misquotes me, shies away from actually displaying the damning graphs I use, gets a bit confused about the difference between a law and a measurement, unwittingly disagrees with his own heroes, and misunderstands the climate models he bases his faith on. Not so “skeptical” eh John? He’s put together a page of half-truths and sloppy errors and only took 21 months to do it.

And then we have the idiotic (although peer [or pal] reviewed) paper on consensus Cook et al. (2013) stated that abstracts of nearly all papers expressing an opinion on climate change endorsed consensus, which, however, traditionally has no scientific role. See:

Hardly a satisfactory margin of error!

In one of his cartoons on UNSkeptical UNScience {Link}, Mr Cook strangely revealed some facts re the man-made climate change debate:

Let's look at the panels:

Yes, and this fact was revealed by none other than the head of the UNFCCC Christiana Figueres recently (See link) and more subtly in this UNFCC press release -


Countries on Track to Paris Agreement

which, as The Washington Times wrote:

The proposed Paris agreement is another reach for global power

The Rudd/Gillard Governments introduced a tax on vital to life CO2, which had devastating effects  on the economy.

As the ABC's DRUM reported on the crippling tax's repeal: (link)


Goodbye to the all pain, no gain carbon tax

The carbon tax lacked democratic legitimacy, hurt the Australian economy, and did nothing to address global warming. Good riddance.

For most of the last million years Earth has experienced glacial conditions, interrupted by only brief interglacial periods of warmth such as the one that we enjoy now.

Just 20,000 years ago, the Earth was experiencing the last glacial maximum. Great ice sheets covered North America to between the 40th and 50th parallels of latitude; a similar ice sheet covered North West Europe and the region of the Alps.The source of the ice was a transfer of water by evaporation from the oceans and precipitation of snow at high latitudes, as a result of which global sea-level was about 130 metres lower than now. Temperatures during the last glaciation were up to 20oC cooler than today over Greenland and 10oC cooler over Antarctica.

At present we are on a temperature plateau. When temperature change begins again, will it head up or down?

Russian Physicist Habibullo Abdussamatov predicts the current lull in solar activity will continue and lead to a new Little Ice Age within the next 30 years. (Hockey Shtick)

So, perhaps the cartoons third panel depicts the truth, perhaps not. But on balance, the cartoon is closer to climate fact than climate fiction. 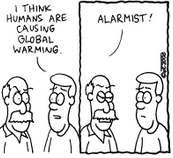 In a strange tweet (link) last month, Cook posted this cartoon showing, as the hoax gets exposed, the public take less and less notice of the disintegrating IPCC: 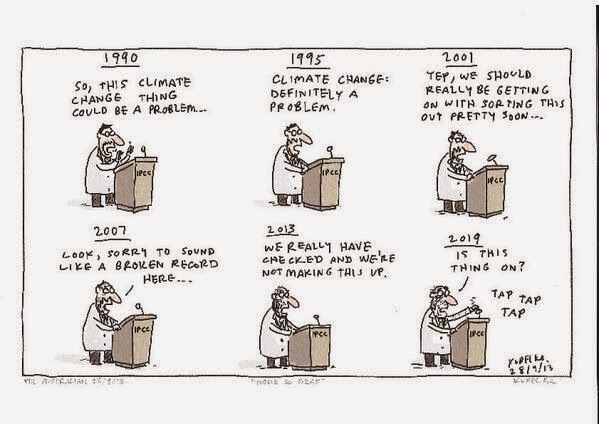