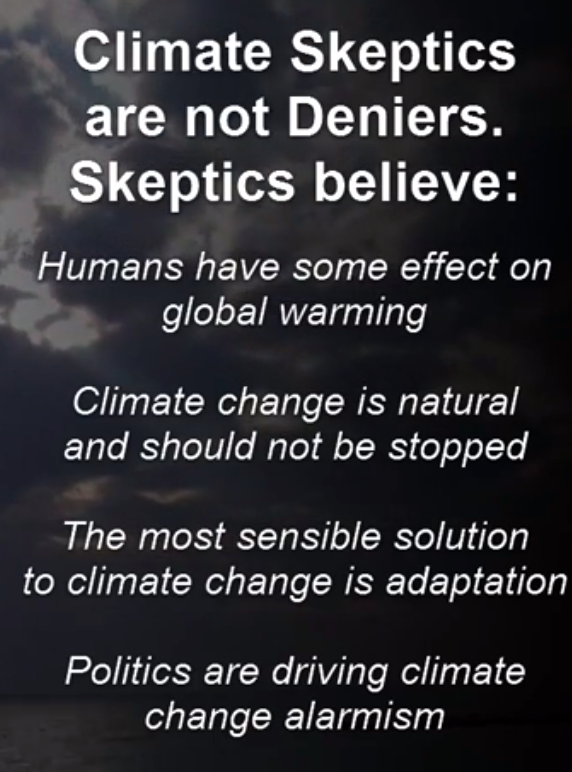 What everyone should know about the Climate Change debate. Intended for those that have some knowledge but want to know more in order to make an informed opinion. This is a good video illustrating why the debate isn't over and explains what you have to lose.

H/t Climate Depot
Posted by Geoff on February 18, 2015 No comments:

"Facts" vs Factoids and "Massaged" Data 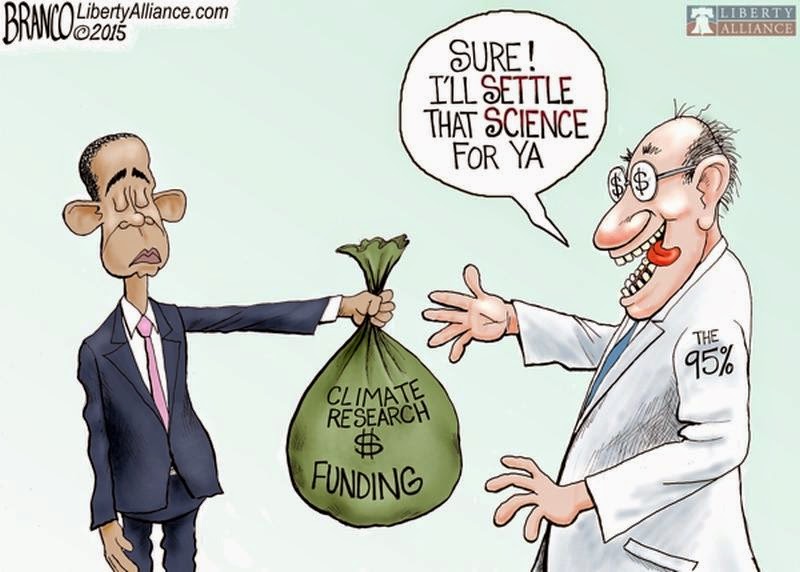 Global warming fanatics manipulate the facts to rescue a scam
Facts are facts, as any reputable scientist would tell you, and if someone tries to change them, like changing a pair of soiled pants, they risk embarrassing exposure. The global warming hysteria is premised on “facts” showing the earth is warming, but these “facts” have been repeatedly exposed as “factoids,” the playful invented word of novelist Norman Mailer, to describe something that is presented as fact, sounds like it could be a fact, but is actually not a fact. Surely imposing global restrictions on human activity, which would deny prosperity to the poorest among us, must be premised on something better than factoids.
Climate alarmists insist that weather stations worldwide indicate the planet is warming. Like a fire bell in the night, they cry in ever shriller tones that Earth is doomed, by man burning coal, oil and natural gas, which release greenhouse gases such as carbon dioxide that trap the sun’s heat. Only the brave dare question the scam, because the science is settled. Facts are facts.
ON this blog we have read Jennifer Marohasy's great work in exposing the unnecessary "massaging" of data to promote the global warming scam (My word, not Jen's) [See inter alia - The Old Data is getting warmer.]
Paul Homewood, on his blog Not a Lot of People Know That has also exposed much of the massaged Data. Some of Paul's posts:-
Washington Times continues:

Several instances of questionable temperature adjustments don’t necessarily prove deceit, but skeptics (climate change alarmists borrow Holocaust language to call these skeptics “climate change deniers”) rightly ask whether similar altered readings around the world are a deceptive numbers game. Even if such adjustments can be plausibly explained, they nevertheless raise the reasonable suspicion that facts have been molded into factoids. If the butcher must not “adjust” the scale with his thumb when figuring the price of salami, neither is it acceptable for climate scientists to adjust the facts to fit the global warming theory that could upend the global economy.

Interesting FACT: All the massaging have "cooled" past "data" and "warmed" present "data."
If the butcher was caught "massaging" the meat's weight with his thumb, he would be prosecuted. Meanwhile the temperature "massagers" are still at large, unprosecuted.

Socialism is often wrapped in the best of intentions, but when good intentions are not enough the good intentions give way to artful deceit. That’s the strategy for manipulating temperature data to frighten the world into accepting a new economic development model. Congress should exercise its oversight role with an investigation of NASA’s “temperature reading practices” to make sure they’re dealing in facts, not factoids.

Read more: The Washington Times
Posted by Geoff on February 18, 2015 No comments:

The lesson of Fukushima — Nuclear energy is safe

Dr Kelvin Kemm is the CEO of Nuclear Africa, a nuclear project management company based in Pretoria, South Africa. He is a member of the International Board of Advisors of CFACT. Dr. Kemm received the prestigious Lifetime Achievers Award of the Naional Science and Technology Forum of South Africa.

This blog has published his previous piece for C-FACT: There was no Fukushima Nuclear Disaster

Dr Kemm has written a follow up piece for C-FACT under the heading:

The lesson of Fukushima — Nuclear energy is safe

He begins by saying that we often read and hear about "The Lessons learnt at Fukushima."

So what were the lessons learned from Fukushima? Quite simply they are that nuclear power has been proven to be much safer than anyone previously imagined.
The nuclear fraternity worldwide should have celebrated after the Fukushima drama. The world watched the entire saga, second by second…and what was the outcome?
Answer: total people killed by radiation, zero. Total injured, zero. Total private property damaged by radiation, zero. Expected long term effects on people; zero.

The giant wall of water jumped the protective wall, and slammed into the nuclear plant. The plant survived that too…initially. But then previous bad management decisions came into play, like ghosts from the past.
Years earlier it had been decided to place the back-up diesel fuel tanks outdoors. Bad decision!

These tanks held the reserve fuel for the emergency diesel cooling pumps, to be used if and when the primary electrical pumps failed. The tsunami washed away the power lines supplying the electricity to the primary reactor cooling pumps…so they needed the diesel pumps…fast.
No fuel, it was all floating away with the rest of the debris from the smashed up houses, schools, police station, airport, shops, offices, harbour.

Although the reactors shut done correctly,  the reactor fuel needs to be water cooled for 2-5 days after an emergency. With the roads either washed away or blocked with tsunami debris, the engineers started to work "with their backs to the wall."


...if a scientific team had intentionally designed a lab crash test for a nuclear power plant, they could not have done better than the reality of Fukushima Daiichi.

In spite of this whole theatrical drama the result was…nobody killed or injured, and no indication of long term negative radiation effects on people. So the lesson of Fukushima is that nuclear power is much safer than people thought.