At the beginning of the year, the Mirror reported: 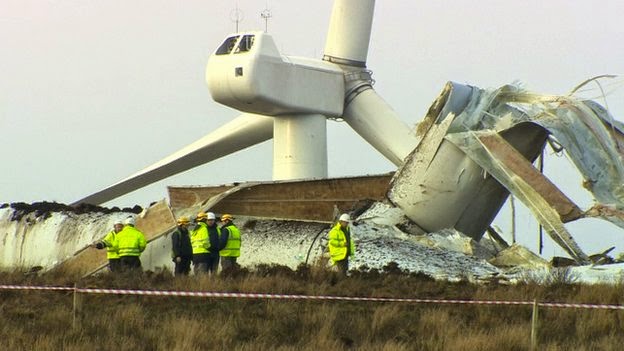 A massive turbine at a windfarm has inexplicably crashed to the ground.

One local said it sounded like a bomb exploding.

A spokesman for DW Consultancy Limited - a firm which develops windfarm projects in Ireland - said it wouldn't comment on what has happened until a statement is released by the manufacturer of the turbine.

The turbine was part of the Screggagh windfarm in the Fivemiletown mountain range between Fintona and Fivemiletown.


The BBC has revealed the cause


A blade control system has been blamed for the destruction of a 100-metre wind turbine near Fintona in County Tyrone.

The turbine collapsed during light winds on Friday 2 January, scattering debris more than 250 metres away on the Screggah windfarm on Murley mountain.

People in the area said the rotor blades were spinning out of control on the evening the turbine buckled.

The sound of the failing mechanical structure was heard more than seven miles away.

Some people said the sound was like thunder. Others report grinding and the sound of metal against metal.