By a Subscriber
How did many usually sensible experts get "GLOBAL WARMING" so very wrong?

RED FACES all around among the profiteers of doom. A wrong equation that falsely triples the tiny direct warming caused by doubling CO2 concentration has been discovered and exposed in a major peer-reviewed paper just published in the Science Bulletin of the Chinese Academy of Sciences  (LINK - pdf), one of the world's top peer review science journals. 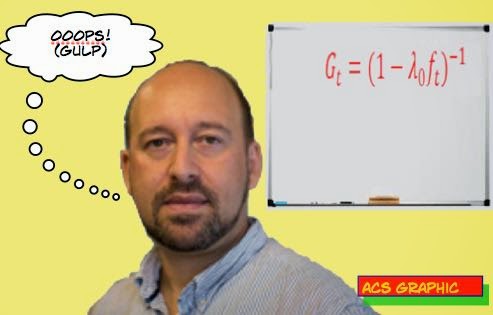 It says the amount by which climate scientists multiply the direct warming from, say, CO2 to allow for “temperature feedbacks” – changes to the climate because it has warmed that make it warm still further – is equal to the reciprocal of 1 minus a third of the sum of all the feedbacks.
They say the feedbacks, measured in Watts per square meter of the Earth per Celsius degree of direct warming, add up to 2. So the equation tells them to multiply by 3. Just 1 Celsius degree of warming from doubling CO2 in the air suddenly, wrongly becomes 3 degrees. A non-event becomes a crisis.
James Hansen – the former director of NASA’s Goddard Institute for Space Studies (who once said anyone who questioned his math should be tried for “high crimes against humanity”, for which the penalty is death) – had lifted the rogue equation, the Bode system-gain relation, from a 551-page tome by R.W. Bode about feedback amplification in electronic circuits, published 70 years ago.
Hansen, and the tiny handful of other climate scientists who realized the rogue equation came from electronic circuitry, had assumed it would work for all kinds of dynamical systems from electronic circuits to the Earth’s climate. But it doesn’t.
It applies only to certain systems whose output (in a circuit, the voltage) does not operate to bring the system back into balance after an overload. But in the climate rising temperature restores the balance between incoming and outgoing radiation. Warming acts against the feedbacks. It damps them down.
Also, in a circuit, when the feedbacks reach a threshold value the current suddenly changes direction and goes around the circuit the other way. A positive current instantaneously becomes a negative current. In process engineers’ jargon, the current flicks from the positive to the negative rail. But in the climate rising feedbacks cannot flick temperature down when they were driving it up just before.
Why does this matter? Because it means the true warming from a doubling of CO2 concentration is not 3 or 5 or 10 Celsius. All the scare stories have been wrong from the get-go. Scientists came up with these exaggerated predictions because, and only because, they were using the wrong equation.
Take the misplaced equation out of your computer model – as the paper by four leading researchers in the Science Bulletin demonstrates – and the climate “crisis” melts away. And it’s the only thing that will melt away. Just three months ago, the world had more sea ice than for 35 years. Also, despite record increases in CO2 concentration, there has been no global warming for 18 years 3 months.
Now we know why.
Not a single red cent need have been spent on making global warming go away. But in Paris this December world leaders – unless they and their advisers read the Science Bulletin – will approve a savage global-government treaty that will give the unelected UN unprecedented powers to tax and regulate elected governments in the name of Saving The Planet from Thermageddon.


And all because of one wrong equation.
Posted by Geoff on January 31, 2015 3 comments:

In 2011 Rahmstorf and Foster [F&R] supposedly proved temperature was really rising despite the pause because AGW warming was still occurring.

F&R claimed to have isolated the AGW warming signal by removing the temperature impact of exogenous factors such as volcanoes, ENSO and the sun. But they made a number of mistakes.

One of those mistakes is they include the temperature trend in the multivariate regression; they say this:

“Using multiple regression to estimate the warming rate together with the impact of exogenous factors, we are able to improve the estimated warming rates, and adjust the temperature time series for variability factors.”

But trend is NOT an independent variable, it is dependent on exogenous factors so the issue is should the trend have been included in the multivariate regression analysis? The short answer is no because the trend itself is contributing to the finding of the trend; in effect F&R are using the GISS temperature to prove the GISS temperature. That is statistical chicanery.

Now we have another attempt by the AGW factory to prove the temperature pause isn’t happening and in fact the IPCC model predictions are consistent with the observations. This time the paper is by Marotzke and Forster. [M&R]

Like F&R,  M&R also isolate exogenous radiative forcing but also claim to quantify internal factors like feedback and ocean uptake of heat. On this basis they conclude:

The differences between simulated and observed trends are dominated by random internal variability over the shorter timescale and by variations in the radiative forcings used to drive models over the longer timescale. For either trend length, spread in simulated climate feedback leaves no traceable imprint on GMST trends or, consequently, on the difference between simulations and observations.

Feedbacks are climate responses to exogenous forcings. But as Spencer and Braswell show the distinction between feedbacks and forcings is artificial and unreal with such prominent climate factors as clouds capable of being both. It is therefore no wonder M&R find no traceable imprint on GMST trends by feedback only internal variability in the short term or 15 years, and radiative forcing in the long term, 62 years, because feedbacks are both examples of internal variability and forcing.

There are other issues with the paper, like with F&R. M&R say they base their multiple regression approach on the Earth’s surface energy balance. That balance entirely proves a real temperature pause not a faux pause masking the inexorable upward trend of AGW temperature. The reason is readily apparent in the observations which show both no heat going into the ocean and an increase in longwave radiation leaving the Earth since 1998, when the temperature pause began: 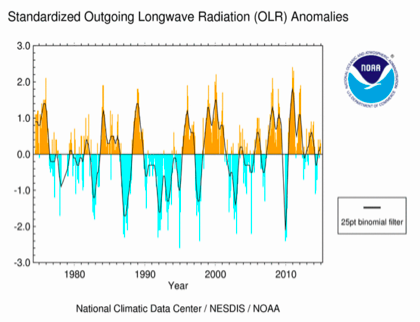 The temperature pause is real and the attempts by the AGW factory to disprove it are becoming ludicrous. Roy Spencer simply rebuts them with this graph: 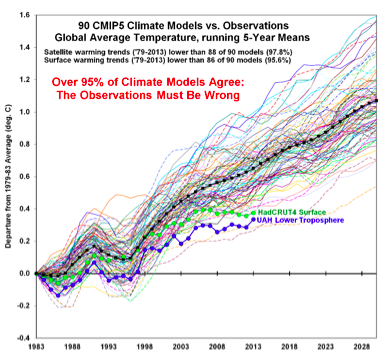 All the statistical shenanigans by F&R and M&R can’t disprove that.
Posted by Geoff on January 31, 2015 2 comments: