An ongoing field study of the effects of elevated atmospheric CO2 on a brackish wetland on Chesapeake Bay, started in 1987, is unique as the longest continually running investigation of the effects of elevated CO2 on an ecosystem. Since the beginning of the study, atmosphericCO2 increased 18%, sea level rose 20 cm, and growing season temperature varied with approximately the same range as predicted for global warming in the 21st century. This review looks back at this study for clues about how the effects of rising sea level, temperature, and precipitation interact with high atmospheric CO2 to alter the physiology of C3 and C4 photosynthetic species, carbon assimilation, evapotranspiration, plant and ecosystem nitrogen, and distribution of plant communities in this brackish wetland. Rising sea level caused a shift to higher elevations in the Scirpus olneyi C3 populations on the wetland, displacing the Spartina patens C4 populations. Elevated CO2stimulated carbon assimilation in the Scirpus C3 species measured by increased shoot and root density and biomass, net ecosystem production, dissolved organic and inorganic carbon, and methane production. But elevated CO2 also decreased biomass of the grass,S. patens C4. The elevated CO2 treatment reduced tissue nitrogen concentration in shoots, roots, and total canopy nitrogen, which was associated with reduced ecosystem respiration. Net ecosystem production was mediated by precipitation through soil salinity: high salinity reduced the CO2 effect on net ecosystem production, which was zero in years of severe drought. The elevated CO2 stimulation of shoot density in the Scirpus C3 species was sustained throughout the 28 years of the study. Results from this study suggest that rising CO2 can add substantial amounts of carbon to ecosystems through stimulation of carbon assimilation, increased root exudates to supply nitrogen fixation, reduced dark respiration, and improved water and nitrogen use efficiency. (bold added)

Patience Required: Studying the Impact of Rising CO2 on a Chesapeake Bay Wetland 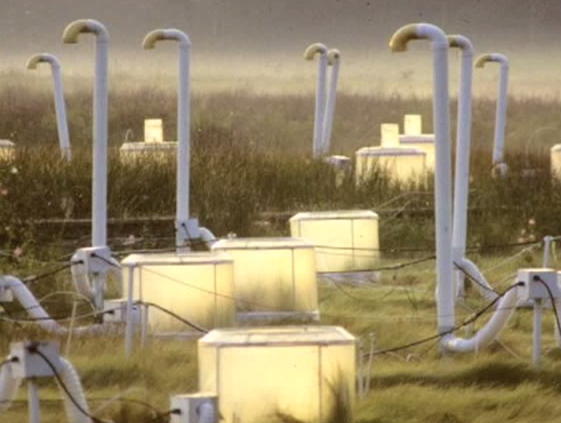 In this video, Smithsonian plant physiologist Bert Drake has studied one wetland's response to climate change for more than two decades. He gives a tour of the field experiment and explains some of the findings.

CO2 Science:
Advising us that "the question of whether rising atmospheric CO2 will cause the land sink for anthropogenic carbon to expand or contract has been the basis for most ecosystem studies to date," Drake writes that we now have, from the Chesapeake Bay study, "strong evidence that shoot and root biomass and net ecosystem production increased significantly" under real-world conditions of growing fossil fuel usage. And he thus infers - from the fact that (1) methane emission (Dacey et al., 1994) and (2) nitrogen fixation were also stimulated by elevated CO2 (Dakora and Drake, 2000), and that (3) inputs of soil carbon also increased - that "ecosystems will accumulate additional carbon as atmospheric CO2 continues to rise, as suggested by Luo et al. (2006)."

In a closely related matter, Drake also writes that the long duration of the Chesapeake Bay wetland study allows for a test of "the idea that some process, such as progressive nitrogen limitation, may constrain ecosystem responses to elevated CO2 in native ecosystems." But his and his associates' findings, as well as those of Norby et al. (2005) and Norby and Zak (2011), imply, as he notes, that quite to the contrary, Earth's ecosystems will continue to accumulate carbon as the air's CO2 content continues its upward trajectory.

Thus we find clear evidence from data obtained in the real world of important benefits conferred by rising atmospheric CO2 upon nature, evidence that many unfortunately continue to deny.
Posted by Geoff on January 28, 2015 1 comment: