Reported this weekend in the MSM, which collectively lacks the wit to allocate blame where it
belongs, is the fact that electricity prices are going to rise especially for high cost equipment like air-conditioners.

Also reported is the compulsion for solar panel owners to move their panels to the West of the property so afternoon peak demand from the air-cons can be met by the repositioned solar panels.

This is beyond stupid. Coal and gas power can be delivered to doorstep in Australia for 1 - 2¢ per kilowatt hour. Check your bill and see the average kilowatt hour fee is about 30¢.

A range of things. So called upgrades to the network which were neglected in NSW by a succession of ALP governments is one thing. But they are a one off.

The primary reason is the ongoing subsidisation of renewables and the enormous infrastructure expense to hook up the solar and wind farms to the grid. The costs of supplying electricity are illustrated in this government graph: 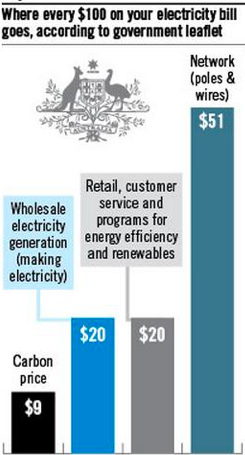 The wretched carbon price is gone but the far right columns still exist so that 71% of the capital and ongoing costs are specifically to do with renewables.

Renewables don’t work. They’re unreliable. Engineers Miskelly and Quirk show that the unreliability of specifically wind power, but the point can be extended to solar, is so great that in effect wind and solar do not produce any useful power at all. They show the probability of wind and solar producing their maximum power, the reliability point, is as low as 3% and no more than 10% at any one moment.

The practical consequences of that are two fold: firstly you cannot plan for definite electricity any time in the future; for instance if reliable power is required in 2 weeks for 3 hours -wind and solar cannot provide that.

Secondly the reliable sources of power, the fossils must be kept ‘spinning’ to back up the times when wind and solar fall out of production.

So, it doesn’t matter if the rooftop solar panels are moved to the West: on a hot, steamy overcast day they’re going to be just as useless as if they were under the house.

The other nonsense in this new policy is the idea that electricity has peak periods. This graph shows the daily demand fluctuation in Australia [from TonyfromOz]: 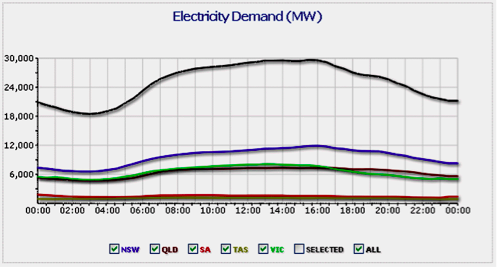 The base load never goes below a regular 18000 MW and peaks in the middle of the day. Renewables cannot ever supply this power because the power generated by renewable installations can vary from 0 to 100% in a day! How can you plan reliable regular grid demand with such variation? You can’t.

So to air-cons. TonyfromOz has looked at the myth of air-cons being responsible for peaks in electricity demand. It’s a lie and easily proved to be a lie. Tony looks at electricity demand on Xmas day and compares it with demand on a normal working day. If electricity demand were affected by air-cons in the way this new policy claims then when everyone is home on a hot Christmas day you would expect to see a greater spike and demand than a normal day: 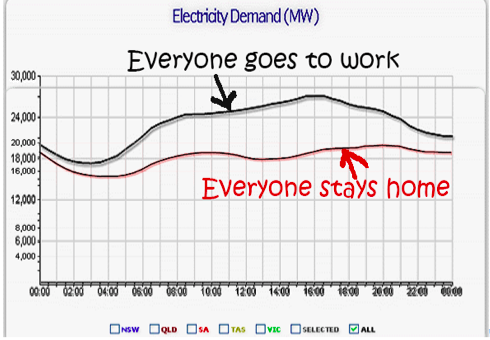 No spike. The reason is simple. Much fewer people are at work, at shopping centres and other large non-residential locations which use air-con all the time.

The greens and the lie of AGW has caused the investment in renewables at great unnecessary expense to electricity users in Australia. Now the conservative governments have to fix up the green mess and they can’t even tell the truth about the ‘problem’ caused by the greens.

How hopeless is that.
Posted by Geoff on January 26, 2015 No comments: