The Arctic blast which swept Britain today could kill one person very seven minutes a charity has warned, with temperatures set to plummet even further and yet more snow on the way.

Almost a million elderly people are at risk from the bitter cold as they cannot afford to heat their homes, Age UK warned last night.

But the big freeze is expected to continue throughout the weekend and into Monday with the mercury forecast to drop as low as -15C following a night which saw six inches of snow fall in some parts of the country.

A reminder of the freezing of the Thames during the Little Ice Age:

Frost fairs on the Thames: How the sun caused global cooling three centuries ago (link)

Mankind’s profligacy with fossil fuels has led to billions of tons of carbon dioxide bring pumped into the atmosphere, creating a warming blanket around the earth – in turn triggering a global fever from which many scientists believe we will take millennia to recover.

But along this week (18/6/2011) come extraordinary claims that cosmic forces beyond our control may be about to plunge the Earth in to a mini-ice age or at the very least they will ameliorate the perilous effects of manmade global warming. 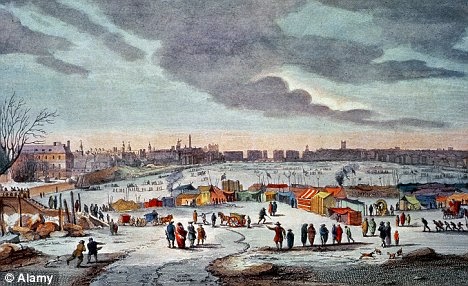