Time to revoke the Alarmists' licence to misrepresent and intimidate 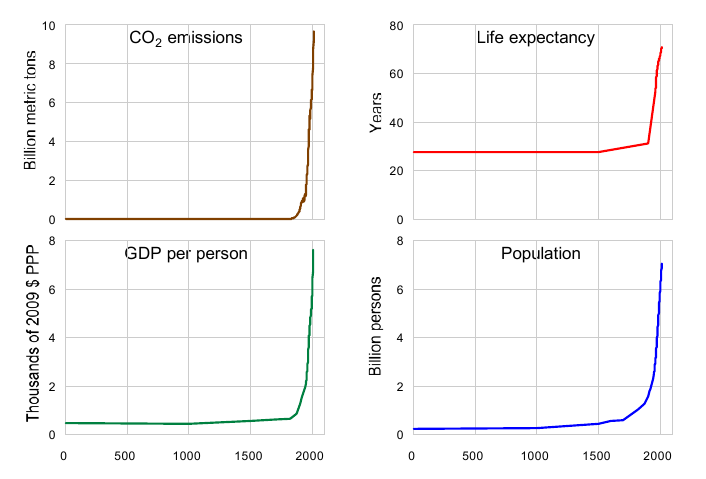 Looking at these graphs, one could make several hypotheses:

Joanne Nova once showed two graphs that indicated that

And, as mentioned on these pages, the apparent similarity between historic atmospheric CO2 and temperature does not mean that CO2 is driving temperature:

We know that Al Gore cheated by separating those graphs and we know that the AGW hypothesis has been falsified multiple times (when once is all that is needed.)

The top four graphs are part of a post on Forbes.com  by a young American: Alex Epstein

How many times do we have to refute this furphy? (Put 97% into the search box to the right and see how many times we have rebutted this.) How any intelligent person, scientist or otherwise, could make the remark without embarrassment amazes most realists.

In his piece, Alex asks:

1. What exactly do the climate scientists agree on?

Usually, the person will have a very vague answer like “climate change is real.”

What you’ll find is that people don’t want to define what 97% agree on–because there is nothing remotely in the literature saying 97% agree we should ban most fossil fuel use.

It’s likely that 97% of people making the 97% claim have absolutely no idea where that number comes from.

Almost no one who refers to the 97% has any idea, but the basic way it works is that a researcher reviews a lot of scholarly papers and classifies them by how many agree with a certain position.

Unfortunately, in the case of 97% of climate scientists agreeing that human beings are the main cause of warming, the researchers have engaged in egregious misconduct.

One of the main papers behind the 97 percent claim is authored by John Cook, who runs the popular website SkepticalScience.com, a virtual encyclopedia of arguments trying to defend predictions of catastrophic climate change from all challenges.

Paid disinformation purveyor and cartoonist Cook's trashy paper has been trashed many times including (inter alia) on these pages:


The 97 percent claim is a deliberate misrepresentation designed to intimidate the public—and numerous scientists whose papers were classified by Cook protested:

“Cook survey included 10 of my 122 eligible papers. 5/10 were rated incorrectly. 4/5 were rated as endorse rather than neutral.”
—Dr. Richard Tol

“That is not an accurate representation of my paper . . .”
—Dr. Craig Idso

Think about how many times you hear that 97 percent or some similar figure thrown around. It’s based on crude manipulation propagated by people whose ideological agenda it serves. It is a license to intimidate.

It’s time to revoke that license.

Pessimistic projections of the world's climate Alarmists will likely never come to pass.

Two things some of the public do not know.

Ocean Acidification: The Oceans are NOT turning to acid. As Bob Carter puts it in his great book Taxing Air:


No, the oceans have always been alkaline and will remain so, despite any minor decrease in alkalinity caused by the absorbtion of extra carbon dioxide

Scientific studies published by Dr David Barnes and others in 2000 in the Journal of Experimental Marine Biology show that a statistically significant 4% increase in coral growth occurred on the GBR during the warming of the 20th century. More recent and detailed monitoring data collected by other staff of the Australian Institute of Marine Science (AIMS) in Townsville es- tablished that:

data collected annually from fixed sites at 47 reefs across 1300 km of the GBR indicate that overall regional coral cover was stable (averaging 29% and ranging from 23% to 33% cover across years) with no net decline between 1995 and 2009.

A Peer reviewed paper published in Proceedings of the Royal Society B-Biological Sciences, Comeau et al. (2014a) write that in spite of "pessimistic projections forecasting the disappearance of most coral reefs before the end of the current century," a compilation of laboratory studies produced by Chan and Connolly (2013) suggests it is more likely that "coral calcification will decline approximately 10-20% (rather than ceasing) for a doubling of present-day partial pressure of CO2." In addition, they note that "more subtle responses to ocean acidification [OA] have also been shown in recent studies reporting signs of resistance to OA for some reef calcifiers," citing the work of Takahashi and Kurihara (2013), Comeau et al. (2013) and Comeau et al. (2014b). And they add that "field observations at underwater CO2 vents in Papua New Guinea and sites with high seawater pCO2 in Palau have also shown that some reef calcifiers can persist in naturally acidified conditions," referencing the studies of Fabricius et al. (2011) and Shamberger et al. (2014).

In their own study of two coral taxa and two calcifying algae - which they conducted in Moorea (French Polynesia), Hawaii (USA) and Okinawa (Japan) - Comeau et al. found that for three of the four calcifiers "there was no effect of pCO2 on net calcification" at any of the three locations, which led them to suggest that this finding "may represent a constitutive and geographically conserved capacity to resist some of the effects of OA." And, therefore, evidence continues to accumulate in support of the view that the vast bulk of the pessimistic projections of the world's climate alarmists relative to future ocean acidification effects on calcifying organisms will likely never come to pass.(CO2 Science)

Abstract:
Ocean acidification (OA) and its associated decline in calcium carbonate saturation states is one of the major threats that tropical coral reefs face this century. Previous studies of the effect of OA on coral reef calcifiers have described a wide variety of outcomes for studies using comparable partial pressure of CO2 (pCO2) ranges, suggesting that key questions remain unresolved. One unresolved hypothesis posits that heterogeneity in the response of reef calcifiers to high pCO2 is a result of regional-scale variation in the responses to OA. To test this hypothesis, we incubated two coral taxa (Pocillopora damicornis and massive Porites) and two calcified algae (Porolithon onkodes and Halimeda macroloba) under 400, 700 and 1000 µatm pCO2 levels in experiments in Moorea (French Polynesia), Hawaii (USA) and Okinawa (Japan), where environmental conditions differ. Both corals and H. macroloba were insensitive to OA at all three locations, while the effects of OA on P. onkodes were location-specific. In Moorea and Hawaii, calcification of P. onkodes was depressed by high pCO2, but for specimens in Okinawa, there was no effect of OA. Using a study of large geographical scale, we show that resistance to OA of some reef species is a constitutive character expressed across the Pacific. 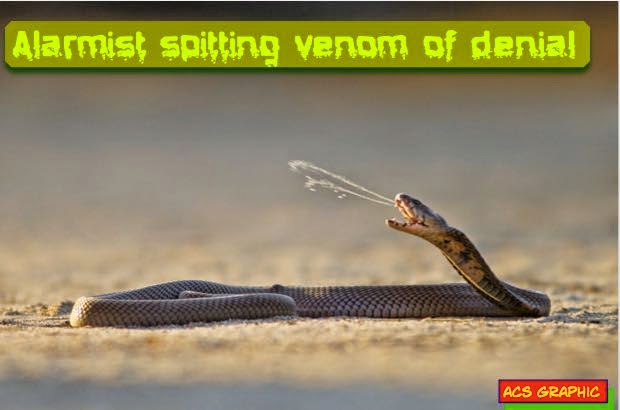 There is a mind-set among the Alarmists. They will not consider data that rubbishes the AGW hoax; they deny science and yet, they bestow the offensive term "deniers" on the Realists.

The worst comes out of these latter day deniers in the blogosphere and on the social media. Usually they display their utter ignorance. When their ignorance is pointed out to them, they spit venom.

To display his ignorance he made some big bloopers; eg

In the 1990′s the classic Vostok ice core graph showed temperature and carbon (dioxide) in lock step moving at the same time. It made sense to worry that carbon dioxide did influence temperature. But by 2003 new data came in and it was clear that carbon lagged behind temperature. The link was back to front.

Our Facebook Fooled Alarmist then lists some items of which he says we Realists are in "denial:"

Our Latter day Denier does not believe that CO2 is a nutrient. Gee, that's turning real science on its head!

One of Life’s most Essential Nutrients


Carbon dioxide is a nutrient as well as a product of respiration and energy production in the cells and its lack or deficiency is of itself a starting point for different disturbances in the body. It is very interesting to note that in comparison with most of the Earth’s geological history we live today in a world that is in a state of relative carbon dioxide starvation, especially for optimal plant growth; just ask the commercial tomato growers who use enhanced levels of carbon dioxide in their greenhouses to expedite crop growth.

Next, our Latter Day Denier denies the data from Satellites by denying the 18 year Warming hiatus. 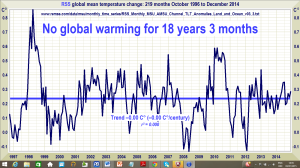 Just cover your eyes, stuff your ears with cotton wool and scream LA-DE-DAH-DE-DAH at the top of your voice so that you don't see the latest data; don't hear the latest data and remain ignorant in your denial. 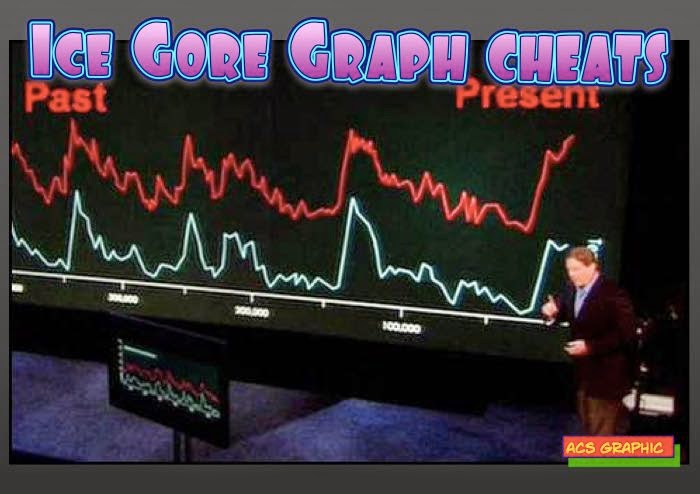 Then he says that we realists deny that "Al Gore is a saint in the religion of AGW." Gee, there are many on the Alarmist side who have realised that Gore is not a saint. Just take one example. The Ice Core Graphs (one above - more at Jo Nova) show that temperature rises before the rise in atmospheric CO2. Of course, to show the correlation you need to show the graphs together.

Latter Day "Saint" Al Gore must have known that, to show the graphs together, would have blown his AGW hoax apart so he separated the graphs. He lied and cheated. Some "Saint."

Alternatives cost too much, and they take funds away from starving people in Africa.

Bjorn Lomborg, who is a believer in the AGW scam, believes the carbon (dioxide) cure costs more than the illness (link)

THE economic cost of tackling climate change with known technologies would be three times higher than taking no action, according to the Intergovernmental Panel on Climate Change’s own reports, Danish academic Bjorn Lomborg said ....

I believe in climate change; the climate is always changing.

So this Latter Day Deniers does not believe that climate has changed since time began? I suppose he denies that there have been glacials and interglacials.

Yep, I don't see many dinosaurs around now; no mammoths....

there are always storms and droughts