Brendon Pearson, Chief Executive of the Minerals Council of Australia announced the details of a report undertaken by economic consultancy Principal Economics

The report found that Australia’s renewable energy sector received subsidies (including the Renewable Energy Target, feed in tariffs and other green policy costs) worth $2.8 billion in 2013-14. 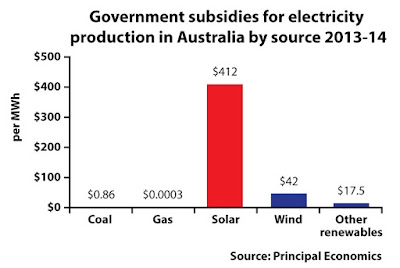 On an output basis, these renewable subsidies translated into almost $412 per megawatt hour (MWh) for solar technologies, $42 per MWh for wind and $18 per MWh for all other renewable sources (including hydro).
By comparison coal fired power received less than $1 per MWh and natural gas less than 1 cent per MWh delivered.
In 2013/14, these renewable energy subsidies added between 3 to 9 per cent to the average household bill and up to 20 per cent for some industrial users.
H/t IPA, Lames Paterson