Levels of CO2 under various conditions 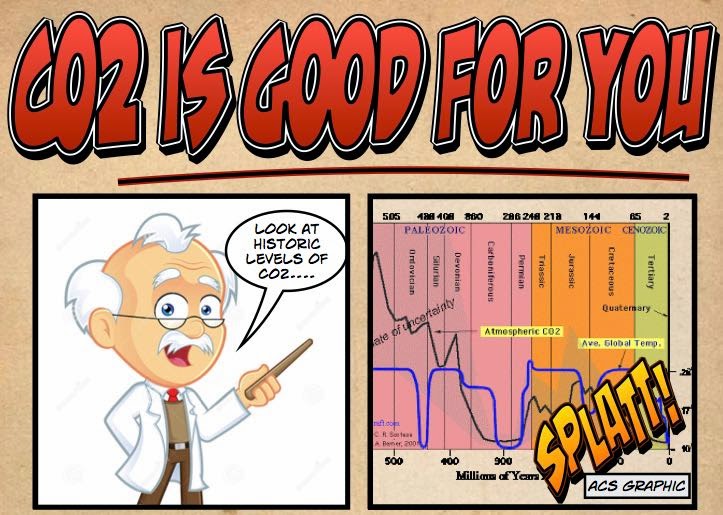 The following summarises levels of CO2 under various conditions:

(all of these data vary a little with size of the space, ventilation, wind, and the like)

From CO2 data shows nobody's dead from a little carbon dioxide (link)
Posted by Geoff on December 30, 2014 No comments:

Cause of Pause in Global Warming 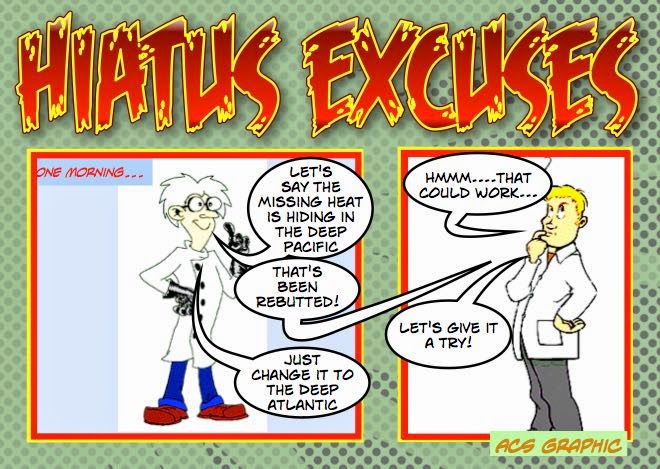 
There has been essentially no global warming since 1998.  Some would choose 1997, others would more conservatively use 2002 as the proper starting date, based on satellite data.  Of course, this is quite unexpected, since CO2 -- a leading GHG, which climate models presume to cause anthropogenic global warming (AGW) -- has been increasing rapidly in the 21st century.

Even if we cannot readily find the cause for the “pause” -- as it is sometimes called -- we can be absolutely sure that it was not predicted by any of the dozens of the UN-IPCC’s General Circulation Models (GCMs).  Therefore, logically, such non-validated GCMs cannot, and should not, be used to predict the future climate -- or as a basis for policy decisions.

Professor Singer then talks of the hiatus or "pause" - "a real crisis for alarmists; it can no longer be ignored by any who consider themselves to be scientists...."

The Alarmists have been scrambling for explanations for the pause and, as Hockey Schtick have noted, there are now up to 58 excuses. The latest:


New excuse for the "pause" of global warming #58: Colder eastern Pacific and reduced heat loss in other oceans

When we look at possible causes, we should first of all distinguish between internal and external ones that might offset the expected GW from CO2.  Internal causes rely on negative feedbacks from either water vapor (WV) or clouds; they act to decrease the warming that should be attributed to increasing CO2.  The problem with internal effects is they can never fully eliminate the primary cause -- almost by definition.  So even if they diminish the CO2 effect somewhat, there should still be a remaining warming trend, though small.

It is quite important to obtain empirical evidence for a negative feedback.  In the case of water vapor, one would look to see if the cold upper troposphere (UT) was dry or moist.  If moist, as assumed implicitly in current IPCC-GCMs, one gets a positive feedback -- i.e., an amplification of the CO2-caused warming.  On the other hand, if the upper troposphere is dry, then most emissions into space take place from WV in the warm boundary layer in the lower troposphere.  This leaves less energy available to be emitted into space from the surface through the atmospheric ‘window,’ and therefore produces a cooler surface.

Professor Singer looks at various possible explanations and then concludes:

Regardless of any unsettled science details, it seems sure that current climate models cannot represent what is actually happening in the atmosphere -- and therefore one should not rely on predictions from such unvalidated models that are based simply on increases of carbon dioxide.  It should be obvious that this discussion has important policy consequences since so many politicians are wedded to the idea that CO2 needs to be controlled in order to avoid “dangerous changes of the global climate.”