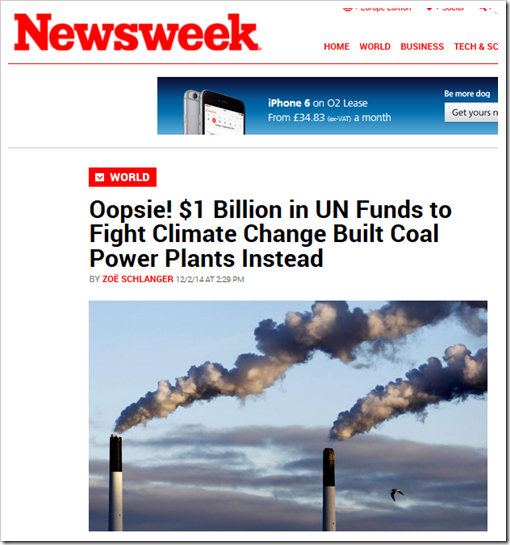 About $1 billion in Japanese funding that Japan claimed was part of a UN initiative to help developing countries take action against climate change went, unnoticed, towards Japanese companies for the construction of three coal-fired power plants, the Associated Press reported Monday.

And from the Associated Press Link:

KANCI KULON, Indonesia (AP) — About $1 billion in loans under a U.N. initiative for poor countries to tackle global warming is going toward the construction of power plants fired by coal, the biggest human source of carbon pollution.

Japan gave the money to help its companies build three such plants in Indonesia and listed it with the United Nations as climate finance, The Associated Press has found. Japan says these plants burn coal more efficiently and are therefore cleaner than old coal plants. Japan, a top contributor of climate finance, denies any wrongdoing and has done nothing illegal — there are no rules against counting such projects as climate finance in the U.N. system.

"There are countries ... that cannot afford to have other methods than coal," Japanese Foreign Ministry spokeswoman Takako Ito said. "For these countries, we'd like to provide the best method of reducing carbon dioxide."

Wake Up Australia we are becoming Green and Defenceless.

Another Issue of "Carbon Sense” prepared for
The Carbon Sense Coalition by Viv Forbes
and volunteer helpers.

TO DOWNLOAD THIS NEWSLETTER WITH ALL IMAGES INTACT,
Ctrl+Click THE FOLLOWING LINK:
http://carbon-sense.com/wp-content/uploads/2014/12/green-and-defenceless.pdf

Wake Up Australia
we are becoming
Green and Defenceless.

Back in Dec 1941, Japan suddenly attacked the huge US Naval base at Pearl Harbour. Three days later, two “invincible” British warships, “Repulse” and “Prince of Wales” were sunk by Japanese planes off Malaya. Soon Japanese armies were rampaging through Asia towards Australia. By Feb 1942, the British fortress of Singapore surrendered and Japanese bombs were falling on Darwin. By Sept 1942 the Japanese army had slashed their way down the Kokoda Track and could see the lights of Port Moresby. They were looking across Torres Strait to Australia. At that time, most of our trained soldiers were fighting Rommel in North Africa or in Japanese prison camps.

Suddenly Australia was on its own and needed to defend itself with what we had here.

Soldiers volunteered and were conscripted. Australian conscripts formed part of the force that met the Japanese on the Kokoda Track.

Enfield Rifles, Bren Guns and Vickers Machine Guns were produced in large numbers at the Small Arms Factory at Lithgow supported by feeder factories in the area. Britain lost so many weapons at Dunkirk that Australian factories were sending guns to them. We could not do that now.

Motor oil was produced in limited quantities from oil shale at Glen Davis, but petrol was in serious short supply, and had been rationed since 1940. With the fall of Singapore, this shortage became severe, and charcoal burners suddenly appeared to keep cars and trucks moving. Kerosene was scarce so carbide lights were widely used. The demand for charcoal was so great that firewood became scarce so it was also rationed.

To conserve supplies for soldiers, rationing was introduced for tea, clothing, butter, sugar, meat and cigarettes. Hotels were only allowed to serve alcohol twice a day for one hour at a time of their choosing.

Mount Isa was called on to avert a calamitous shortage of copper in Australia. With government encouragement, Mount Isa Mines made the brave decision to suspend the profitable silver/lead/zinc operations and convert all mining and treatment facilities to extracting copper.

The lead concentrator could be converted to treat copper ore, but the biggest problem was how to smelt the copper concentrates. Luckily the company had skilled engineers and metallurgists in the lead smelter. In a miracle of improvisation, scrap steel and spare parts were purchased and scavenged from old mines and smelters from Cloncurry, Mt Elliott, Mt Cuthbert and Kuridala and cobbled into a workable copper smelter. In 1943 the first Mount Isa blister copper was produced. Production continued after the war when Mount Isa returned to extracting the then more profitable silver/lead/zinc. Later new plant was built enabling both lead and copper metal to be produced from this fabulous mine.

This story of the importance of self-reliance has lessons for today.

The war on carbon energy, the carbon tax, the renewable energy targets, escalating electricity costs and the voices in Parliament calling for Emissions Trading Schemes have all unnerved our big users of carbon fuels and electricity. Smelting and refining have become threatened industries in Australia, and closure of the Mount Isa copper smelter and the Townsville copper refinery has been foreshadowed. Already six major metal smelting/refining operations have closed in Australia this century and more are likely. The closures have affected copper, lead, zinc, steel and aluminium – the sinews of modern industry. And the car industry, with all its skills and tools, is closing.

More and more land and offshore waters are totally closed to exploration and mining. Offshore exploration for oil is very limited, except in the north-west. On land, there is no exploration in green no-go areas and the “lock-the-gate” rent-a-crowd are trying to prevent gas explorers from drilling even on their own exploration tenements. Local production and refining of oil is also declining, and it was estimated recently that by next year, half of Australia’s oil refining capacity will have closed. In the event of a disruption to tanker routes, Australia has just 12 days of diesel supplies before city fuel and food supplies start to dry up. Will we see charcoal burners on cars and trucks once again?

Heavy industry is scorned, and is migrating to Asia. We are losing the resources, skills and machinery needed for our own security, while we fritter away precious resources on green energy, direct action, carbon capture and storage and other pointless anti-carbon chimeras.

Our foolish green energy policies and the suicidal war on carbon fuels are killing real industry leaving us unskilled and defenceless – like a fat toothless walrus basking on a sunny beach.

“Mines in the Spinifex – the Story of Mount Isa Mines” by Geoffrey Blainey, Angus and Robertson, 1960

“The Challenge of Standing on the Shoulders of Giants” by Collin Myers, Congress of the International Mining History Association, Charters Towers, 2014
.
Viv Forbes, 11/11/14

Warmth is Good; Cold is the Killer.

For decades green extremists have been spreading doomsday forecasts of global warming.

But where do we find the greatest abundance of life on land? Follow the equator around the globe – the Amazon, the Congo, Kenya, Indonesia and New Guinea – all places where it is warm and wet.

And where is life such a struggle that few species live there? Go towards the poles – the Arctic Tundra and the cold deserts of Antarctica and Greenland.

Where do most tourists go in winter? Few go to Alaska or Iceland – most head towards the warmth of the Mediterranean, the Caribbean, the Black Sea and Bali.

Which season is most welcomed? It is not the first frost, nor the first snowstorm, but the first cherry blossoms, the first robins, and the welcome green shoots of new spring pasture.

Land life multiplies in summer – many mammals hibernate or die in winter. The old people head for warm climes and many die in winter.

This is why the warm eras of the past are remembered as periods of plenty – the cold eras are times of hunger, migrations and war.

Life on Earth has never been threatened by greenhouse warming. It is the sudden plunge into an ice age that we need to fear.

Green alarmists should venture from their cosy offices and coffee shops and celebrate the welcome warmth of our global greenhouse while it lasts.

In case you have not noticed, there is another Climate Conference in Lima. Their goal is to stitch up yet another agreement that transfers power and cash to the UN and various unelected international pressure groups. Using their compliant “researchers”, publishers and media we can expect a flood of climate alarmism to hit the air-waves. We need to make sure our representatives agree to sign NOTHING and donate NOTHING in Lima. 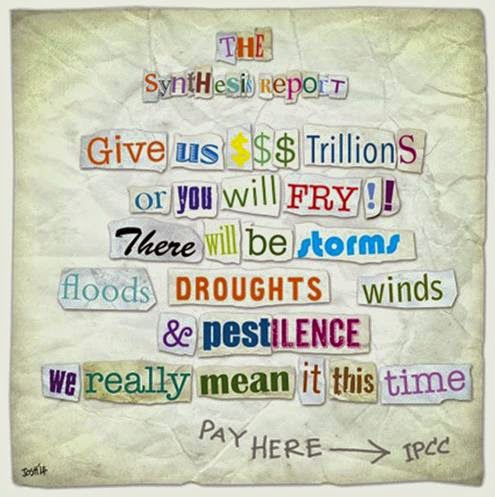 “India will not sign any deal to cut greenhouse gas emissions at UN climate talks in Lima that threatens its growth or undermines its fight against poverty, the environment minister said on Friday. The minister branded poverty as the worst kind of environmental disaster which "needs to be eradicated immediately", adding that no one should dispute the right of the poorest members of society to have access to energy. "Poor people have aspirations we must fulfil them, we must give them energy access," he said.” --AFP, 5 December 2014

The headline read: “Scotland’s wind power supplies 25% of their power”. In reality it was just on one day at 5.30am when few people needed the burst of wind energy:
http://www.scotsman.com/news/opinion/letters/cost-of-wind-1-3614633

Climate Poker - Oops, not quite what was planned:

Obama conned by China who promised to do NOTHING before 2030; now China demands “Climate Compensation”; India will sign nothing that constricts it in Lima; coal power hits records in Japan and Germany; Japan helps Indonesia build coal-fired power stations.

A Century of Failed Forecasts and Revealing Comments:
http://wattsupwiththat.com/2014/12/05/friday-funny-over-a-centurys-worth-of-failed-eco-climate-quotes-and-disinformation/