The ABC is out of control.

In a recent poll about the farcical China/US deal about emissions the ABC’s The Drum initially showed this result:

12/11/2014: China and the US have struck a new deal to limit greenhouse gas emissions. Do you think Australia will need to adjust its climate change policies as a result?

Given the ABC’s Left/Green readership a remarkable result. However shortly the result was changed to this:

12/11/2014: China and the US have struck a new deal to limit greenhouse gas emissions. Do you think Australia will need to adjust its climate change policies as a result?
6001 votes counted

How could you trust an organisation which lies like that and distorts public information?

You can’t. So when on page 6 of its report the ABC gloats that 84% of the Australian people think it provides a valuable service you cannot believe this.

The ABC workforce is sheltered from the reality of normal commercial practice: 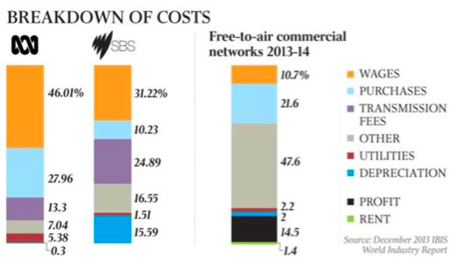 You would think that would make its workforce grateful and more responsive to its Charter of balance but consider these: 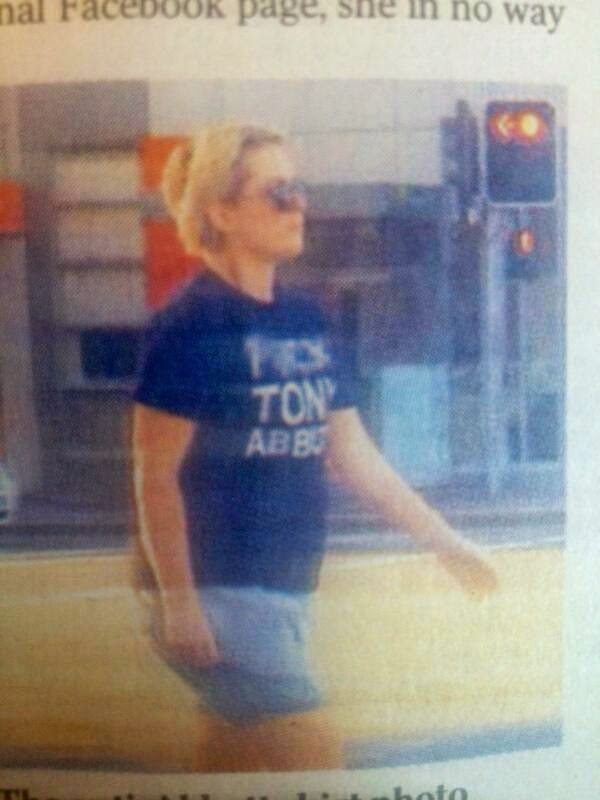 The ‘lady’ in the photograph is Whitney Fitzsimmons host of the ABC’s Business Today. Would you want to do business with her?

And of course Trioli’s infamous reaction to Barnaby Joyce: 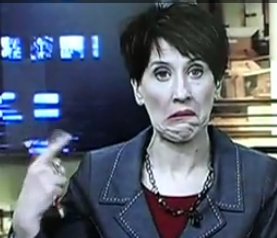 Trioli was a supporter of Bin Laden after 9/11.

Even old Quentin Dempster can’t help but get into the act: he calls the ABC cuts “a piece of Tony Abbott/Rupert Murdoch bastardry”.

The ABC is outrageously biased, pro left, pro Green and ferociously anti-conservative. It has NO conservative commentators. Yet Murdoch has many left wing writers working for him:

Bolt sums up the issue perfectly:

The point is: why doesn’t the ABC show the same commitment to plurality that Murdoch does, when, unlike Murdoch, it is actually legally obliged to?

The answer of course is that the ABC has not been brought to heel but allowed to continue on its path of betrayal by ALP governments which it favours and also weak coalition governments.

In a mature democracy where anyone can start their own media outlet it is a nonsense that a hugely expensive media outlet which is palpably biased towards one section of the community should have its funding provided by all the community.

That the ABC views the community with contempt is clearly shown by the actions of Mark Scott, who has admitted he cannot control the ABC, and his cuts to those sections of the ABC which may impact most on the conservative section of the community.

Such contempt should not be rewarded by further funding.

[Ed] Larry Pickering finds that the ABC is even-handed:

Early chemical measurements of the concentration of carbon dioxide in the earth’s atmosphere have been suppressed by the Intergovernmental Panel on Climate Change.

Chapter 1 of the IPCC Fourth Report1, entitled “Historical overview of Climate Change Science” makes no mention of any early measurements.

Weart2 in his “History of the Carbon Dioxide Greenhouse Effect” also makes no mention of them.

Yet Beck3 has provided an annotated list with links to internet access of almost 200 references to peer reviewed academic scientific journal articles containing some 40,000 measurements of atmospheric carbon dioxide by chemical methods between 1800 and 1960. Comprehensive data sets in more than 390 papers were ignored despite contributions from prominent scientists like Robert Bunsen, Konrad Roentgen, and J S Haldane or the Nobel Prize winners August Krogh and Otto Warburg.

The earliest listed publication in 1800, and others from 1809-1816, are by Theodore de Saussure. He was the son of Horace-Benedict de Saussure, who invented the Hot Box (which resembled a greenhouse) which was the basis of the theory of the climate developed by Jean Baptiste Joseph Fourier in 1822 and 1824 which is claimed to have originated the greenhouse effect. Yet the measurements of atmospheric carbon dioxide by de Saussure's son are completely ignored.

Other early references by Letts and Blake 1802 and 1719-15 from The Royal Dublin Society give an additional list of early measurements.

Beck4-5 has published several summaries and commentaries on the early measurements and include an argument with Ralph Keeling6.

Most of the early measurements were from Northern Europe. Beck considered that the earliest measurements were subject to various errors but the widespread use of more reliable equipment, particularly the Pettenkoffer titrimetric method in 1812 led to high accuracy, with a maximum 3% error reducing to 1% for the data of Henrik Lundegardh (1920–26).

The measurements selected by Beck were from rural areas or the periphery of towns, under comparable conditions of a height of approx. 2 m above ground at a site distant from potential industrial contamination. They showed a variation with time of day, of season, and of wind speed and direction, making it difficult to derive a local average, There were frequent measurements of concentrations higher than those reported as background concentrations by NOAA at present.

These measurements were carried out by real people with proper instruments in a large number of localities. They give a much better appreciation of variability and change in atmospheric carbon dioxide concentration over the period than the deductions from gas trapped in ice cores which are from unrepresentative locations and subject to much uncertainty7.

In 1958 Charles Keeling, introduced a new technique for the accurate measurement of atmospheric CO2 using cryogenic condensation of air samples followed by NDIR spectroscopic analysis against a reference gas, using manometric calibration. Subsequently, this technique was adopted as an analytical standard for CO2 determination throughout the world, including by the World Meteorological Association.

The climate models sponsored by the Intergovernmental Panel on Climate Change are based on the belief that the global climate has a “balanced“ energy which is only changed by increasing concentrations of carbon dioxide and other greenhouse gases. These gases are assumed to be well-mixed so that their concentration, all over the world, is a constant at any one particular time, increasing only with human emissions.

In order to support this theory Keeling at the Scripps Institution of Oceanography, “discovered” that there was an almost consistent “background” concentration of carbon dioxide which could be identified from suitable sites and shown to increase with carbon dioxide emissions, which could be considered to apply globally.

The procedure required to identify this background is described in some detail by Tans and Thoning8  for the observatory at Mauna Loa.

Measurements whose standard deviation fell below a specified minimum were rejected On average, over the entire record, there are 13.6 retained hours per day with background CO2. The rest were rejected as “noise”.

Beck9 has discussed the Mauna Loa measurements. Comparison between old wet chemical and new physical methods in 1958 and 1967 on sea and land give a difference of about +10 ppm for the new procedure.

A similar procedure has been described for New Zealand 10


At Baring Head maritime well mixed air masses come from the Southerly direction, and a baseline event is normally defined as one in which the local wind direction is from the South and the standard deviation of minute-by-minute CO2 concentrations is <<0 .1="" 6="" font="" for="" hours.="" more="" or="" ppmv="">

This “background” concentration is supposed to be well-mixed and to be unaffected by sources and sinks.

Yet the oceans are themselves contaminated with sources and sinks.11

The region around Mauna Loa includes areas with CO2 emissions, and much of the rest is a sink. It is understandable how difficult it is to get a sufficiently constant sample.

In order to claim that there is such a thing as a background CO2 it has been necessary to ensure that all measurements everywhere in the world are made from samples from over the oceans. Measurements over land surfaces have been comprehensively discouraged.

Yet the greenhouse effect is about emissions, namely “contamination” It is crazy, to take all this trouble to make measurements which do not involve the emitted gases themselves, but only a small fraction that is considered to be well-mixed, then to claim that it is these background figures which apply to the entire atmosphere.

This map shows that actual local concentrations of carbon dioxide are greatest over the
three large industrial areas. Since the supposed greenhouse effect is dependent on the logarithm of the carbon dioxide concentration, this means that above these areas the effect of increases is negligible or zero and the main supposed effects are on the areas with low current concentrations.

But this map does not tell the whole story.

Satellite measurements of carbon dioxide levels in the atmosphere have recently improved with the Atmospheric Infra Red Sounder (AIRS) on NASA's Aqua level 3 satellite, which is able to provide monthly figures for mid troposphere concentrations.

This shows that for the mid troposphere regions the high emissions from the industrial countries are circulated, by the atmosphere, so that they are no longer above the regions of emission. Since this is a time as well as a column average the actual carbon dioxide concentration at any small region in the atmosphere is changing all the time and an overall figure above a particular place on the earth is continuously varying and currently unpredictable.

It also means that measurements taken just above the earth’s surface do not provide a fair guide to the influence of carbon dioxide at that place on the surface.

So carbon dioxide is not well-mixed in the atmosphere and the overall global models are no longer relevant.

NASA has even provided an animated video14 based on a model of what they think happens. It shows that actual carbon dioxide concentrations vary with time and level everywhere in the atmosphere. The new OC-2 satellite promises to make individual time- and level-based measurements.15  A global model is no longer relevant.

At least carbon dioxide can be shown to be beneficial.16

It is worth quoting the abstract of the paper by Randall et al 2013:


Satellite observations reveal a greening of the globe over recent decades. The role in this greening of the “CO2 fertilization” effect—the enhancement of photosynthesis due to rising CO2 levels—is yet to be established. The direct CO2 effect on vegetation should be most clearly expressed in warm, arid environments where water is the dominant limit to vegetation growth. Using gas exchange theory, we predict that the 14% increase in atmospheric CO2 (1982–2010) led to a 5 to 10% increase in green foliage cover in warm, arid environments. Satellite observations, analyzed to remove the effect of variations in precipitation, show that cover across these environments has increased by 11%. Our results confirm that the anticipated CO2 fertilization effect is occurring alongside ongoing anthropogenic perturbations to the carbon cycle and that the fertilization effect is now a significant land surface process.

Right on schedule, winter will be making its real debut at the end of this week as a colder air mass pushes westward into Central Europe, so writes German weather portal donnerwetter.de here.

This does not come as any surprise to those who ignore the warming hysteria in the media and follow the observed data. Today, according to the European Institute for Climate and Energy (EIKE) here, data from the DWD German national weather service shows that winters in Germany have been cooling significantly and in parallel with those in Austria for close to three decades – despite rising CO2 emissions.

If Co2 has a warming effect, it hasn’t been seen in Central Europe since James Hansen testified before Congress in 1988!

Hmmm.....Was it James Hansen's testimony that caused the cooling?