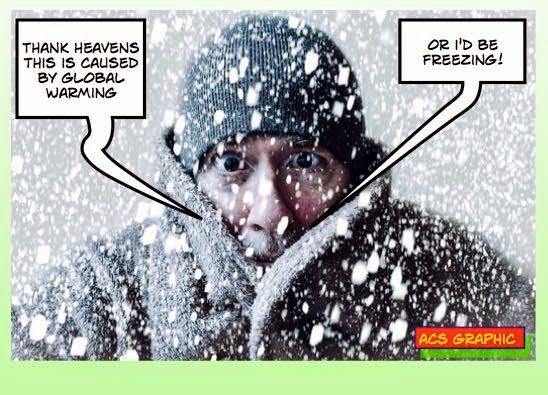 Back in 2012, two researchers with a particular interest in the Arctic, Rutgers' Jennifer Francis and the University of Wisconsin-Madison's Stephen Vavrus, published a paper called "Evidence linking Arctic amplification to extreme weather in mid-latitudes." In it, they suggested that the fact that the Arctic is warming so rapidly is leading to an unexpected but profound effect on the weather where the vast majority of us live -- a change that, if their theory is correct, may have something to do with the extreme winter weather the U.S. has seen lately. (bold added)

In the Conclusions to their paper, Francis and Rutgers


In summary, the observational analysis presented in
this study provides evidence supporting two hypothesized
mechanisms by which Arctic amplification – enhanced Arctic
warming relative to that in mid-latitudes – may cause more
persistent weather patterns in mid-latitudes that can lead to
extreme weather...(bold added)

Suggested? May have something to do with? May cause more persistent weather patterns?

As one of the comments to the article said:


Plausible mumbo jumbo is still mumbo jumbo. At best it is an educated guess based on faulty information.


‘In what universe does a cold winter, a cool summer, cold lake water, and an unusually cold fall air mass result from global warming?’


It has become axiomatic (and fashionable) that any change we see in nature is caused by  climate change.

Global warming was going to make snow a thing of the past. Until someone looked out the window and decided global warming causes more snow.

Now they are contradicting themselves. They once said:


Global warming, the heating of the atmosphere by increased amounts of industrial gases, is now accepted as a reality by the international community.

However, the warming is so far manifesting itself more in winters which are less cold than in much hotter summers. According to Dr David Viner, a senior research scientist at the climatic research unit (CRU) of the University of East Anglia,within a few years winter snowfall will become "a very rare and exciting event".

"Children just aren't going to know what snow is," he said.

So Global Warming used to mean "no snow," but now means "more snow."

The Lunatics are running the "Climate Science" agenda.