2014: Heading to be the Hottest Year for Alarmist Lies! 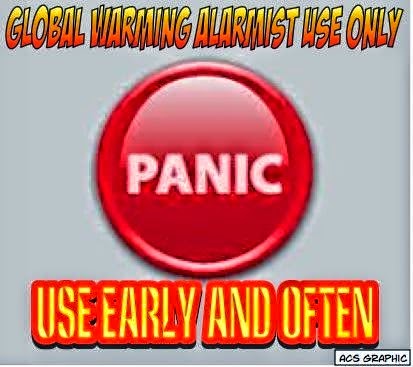 The Alarmists' scares are getting worse. The Top 27 World leaders gathered in Brisbane, Australia for the G20 (or should that be G27) and led to cringe-worthy comments from the Leftist media. Oh how they wanted the temperature in Brisbane to hit 40ºC and they indeed predicted the temperature to hit 40ºC  for the two days of the summit, e.g. The SMH


Leaders attending the G20 summit in Brisbane may not get to talk much about climate change but it might be harder to avoid discussing the weather.


The official BoM record for shows that the top Steadman Apparent Temperature for Saturday was 33.8 at 1PM and Sunday peaked at 37.2ºC at 12:30PM. (LINK - BoM) As Warwick Hughes points out, the top November temperature recorded for Brisbane was 41.2 in 1913.

Around this time every year the Alarmists shamefully scream: This year will be the hottest ever.

And every year they are proved to be wrong. Here is the latest shock scream from the scandal sheets:

DID THEY MEAN HOTTEST EVER?

But surely, there were hotter temperatures in the Minoan, Roman and medieval warm periods?

A simple check with the satellite data would falsify the alarmists' wails. The RSS data:

Confirmed by the UAH data:

According to RSS, the YTD anomaly ranks a very ordinary 7th warmest since 1998. UAH make it tie 3rd. Both are well below the two hottest years in 1998 and 2010.

We have been continually told that the satellite data will catch up with the surface data after a lag, but it has stubbornly refused to do so.

There is absolutely no way this year will get anywhere those record years on the satellite datasets, which is precisely why we will hear nothing about it from NASA, NOAA or the MSM.