Not accepting the judge's opinion, POTUS Obama is set to use executive action to push through a sweeping list of policies re  (the non-existent) Global Warming.

The Obama administration is set to roll out a series of climate and pollution measures that rivals any president’s environmental actions of the past quarter-century — a reality check for Republicans who think last week’s election gave them a mandate to end what they call the White House’s “War on Coal.”

Tied to court-ordered deadlines, legal mandates and international climate talks, the efforts scheduled for the next two months show that President Barack Obama is prepared to spend the remainder of his term unleashing sweeping executive actions to combat global warming. And incoming Senate Majority Leader Mitch McConnell will have few options for stopping the onslaught, though Republicans may be able to slow pieces of it.

Of course, the economy-killing measures in the deal with China will be included. What a deal! China can increase their emissions until 2030 whilst the US stifles their economy. Boy, did Chinese President Xi Jinping put one over POTUS Obama.


Obama announced yet another initiative Wednesday in Beijing, where he and Chinese President Xi Jinping jointly committed (No,not commitments.They announced intentions only. Ed) to targets for the two nations to curb their carbon emissions during the next two decades. And on top of all that, the administration is expected in the coming weeks to pledge millions of dollars — and possibly billions — to help poor countries deal with the effects of climate change.

The pending EPA actions alone could amount to the most ambitious burst of environmental regulatory activity from Washington since President George H.W. Bush approved a crucial set of amendments to the Clean Air Act in 1990 — although Obama’s administration has already taken several big strides of its own, including limits on mercury pollution from power plants.

Although the Republicans, who control both US houses are slamming the deal, POTUS executive action will over-rule them.

Senate Minority Leader Mitch McConnell, House Speaker John Boehner and Sen. Jim Inhofe, who is expected to chair the Senate Environment and Public Works Committee, slammed the agreement in statements released shortly after the deal was announced Wednesday.
"I read the agreement - requires the Chinese to do nothing at all for 16 years while these carbon emission regulations are creating havoc in my state and other states around the country," McConnell, who hails from the coal state of Kentucky, said on Capitol Hill. Boehner called the deal another example of Obama's "job-crushing policies."
"And it is the latest example of the president's crusade against affordable, reliable energy that is already hurting jobs and squeezing middle-class families," Boehner said in a statement Wednesday.
Inhofe criticized the deal as unfair and knocked the Chinese pledge to produce 20% of its energy from zero-emission sources as "hollow and not believeable."
"The United States will be required to more steeply reduce our carbon emissions while China won't have to reduce anything," Inhofe said.
Read more at POLITICO and cnn
Posted by Geoff on November 13, 2014 No comments: 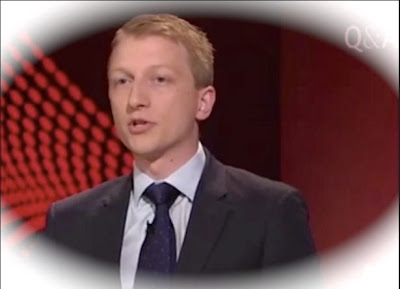 Direct Action will lower the globe’s temperature by about as much as Labor’s carbon tax would have, (ie virtually nothing; Ed) which is to say: not very much at all because Australia makes up a very tiny proportion of the globe’s emissions.

On the Positive side of Direct Action you would certainly do less damage to the Australian economy  than the carbon tax would have. And it does have the advantage that, if the government changes its mind, it can be switched off relatively easily. On the negative side, though, I worry that it encourages business to think of government as a customer or a source of finance.

Now earlier this year the Abbott Government made in my view an excellent decision to refuse a bail-out to Qantas; but Qantas has recently said that they’ll be seeking funds through the Emissions Reduction Fund to buy a whole new fleet of planes that are more energy efficient.

It’ll be quite ironic if the government refused a bail-out for jobs but turned around and gave them a bail-out for environment. This is the kind of industrial scale rent seeking that these kinds of policies encourage and it’s very dangerous.

U.S.China - Intentions only - no commitment 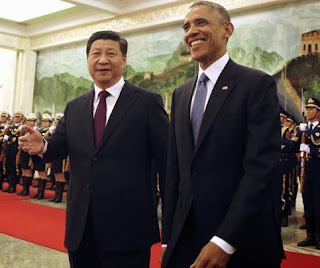 No firm commitment, only intentions and long term intentions at that. US have 11 years to reach their non-commitment. That will be two or three presidents into the future. Will the Republicans support this announcement?

China has 16 years of increasing emissions before they level off at their non-commitment.  A lot of water will flow down the Yangtze before then. In the meantime, China opens up a new coal-fired power plant every 10 days.

In China pollution is always present. Particulate matter clouds the air. This is not vital to life invisible carbon dioxide.  Bloomberg Reports:

Before President Barack Obama and other world leaders arrived in Beijing, environmentalists and others concerned about climate change had reason to be doubtful about the meeting. First, China’s government tried to turn the capital into a giant Potemkin Village: To clean the city’s air pollution in time for the arrival of the VIPs, the government  told residents to get out of town. When that didn’t work and the smog persisted, China started blocking data on air pollution.

India To Double Coal Output By 2019

The Indian government estimates that it will need to spend around $250bn over the next five years in order to connect the entire nation to the grid.
The country’s energy minister, Piyush Goyal, said $100bn of the new investment would be in renewables and $50bn in transmission, with the rest in other areas.
“We can see a situation where we will have power for all businesses, all homes, all offices right through the length and breadth of India,” Mr Goyal said.
The minister re-affirmed that output would be increased through improving the overall power mix. This includes greater use of renewables such as wind and solar, and a doubling of state-run Coal India’s mine output to 1 billion tonnes a year in the next five years to provide fuel for big new coal-fired power plants
Posted by Geoff on November 13, 2014 No comments: